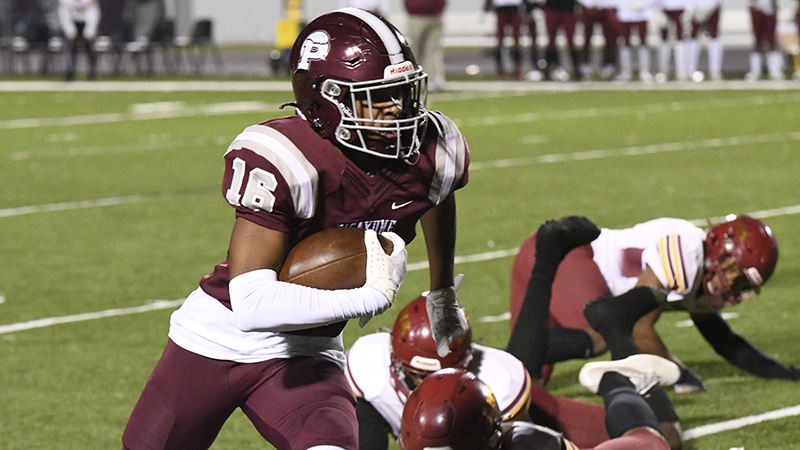 Noah Carter runs for a first down during the Maroon Tide’s final four game against the Tornadoes. Photo by David Thornton Jr.

The Picayune Maroon Tide made a late comeback win over the Laurel Tornadoes after over coming a double digit deficit at halftime.

“It’s a big time win especially being able to come back like we did after halftime. We were down 11 points but the guys never gave up, they fought hard. It’s what we preach every week, is to fight hard for 48 minutes and that’s exactly what we did today,” said Head Coach Cody Stogner.

The Maroon Tide hit pay dirt first, after brining the ball 63 yards through 12 plays. Donta Dowdell capped off the drive with a 3 yard run.

Morgan Craft’s PAT was good and the Maroon Tide led 7-0 with 4:45 left in the first.

The two teams went back and forth and it wasn’t until the second quarter when the Tornadoes found the end zone. Laurel scored quickly in one play for 78 yards by Kiron Benjamin. Combined with John Gonzalez’s PAT the score was tied 7-7.

The Maroon Tide answered back, but with three points, through five plays when Morgan craft kicked in a 32 yard field goal, giving the Maroon Tide a 10-7 lead with 7:27 left to play.

The Maroon Tide defense made a big fourth down stand and put a hold to a Tornadoes offensive drive. In The following possession the Maroon Tide tried a pass play but Dawson Underwood’s toss was short and picked off by the Tornadoes’ defense who ran it to the 33 yard line.

The Tornadoes found the end zone in two plays for 33 yards when Kiron Benjamin ran it in for 11 yards, giving the Tornadoes the first lead of night at 14-10 with 3:32 to play.

Picayune answered back in the next play when Dante Dowdell ran the ball 55 yards for a touchdown, giving the Maroon Tide the a 17-14 lead with 3:19 to play.

The Tornadoes then found a rhythm to the end zone in 10 plays for 63 yards when Javonta Caldwell capped off the drive with a 15 yard pass to Tyrone Jones. That play gave the Tornadoes a 21-17 lead with 49 seconds before half.

The Maroon Tide worked quickly and made it to the 20 yard line with four seconds left, allowing Morgan Craft to try for a field goal but the kick fell wide left and the Maroon Tide went into the break trailing 21-17.

Out of the halftime break, the Maroon Tide made it all the way to the 10 yard line but on fourth and four Donta Dowdell came up short of the first down and the Tornadoes took over on downs. The Tornadoes capitalized by scoring a touchdown in nine plays for 97 yards, capped off by Javonta Cardwell’s pass to Tyrone Jones for 34 yards. The play put the Tornado’s’ lead at 28-17 with 5:21 left in the third quarter.

Both teams punted their following possession but once the Maroon Tide got the ball again they scored in five plays covering 34 yards. Picayune went for a two point conversion, but came up short, still closing the gap with a score of 28-23.

Later in the game , the Maroon Tide defense made another great stand and forced the Tornadoes to punt in their own endzone, resulting in a safety and two points for the Maroon Tide. With 3:25 the Maroon Tide are down 28-25 and they get possession.

In six plays covering 63 yards the Maroon Tide scored again when a six-yard run from Chris Davis gave the Maroon Tide the lead 32-28 with 1:22 to play. The Tornado tried to answer but they had a long 77 yards to go.

Next for the Maroon Tide will be 5A State Championships on Dec. 4 against the West Point Green Wave.