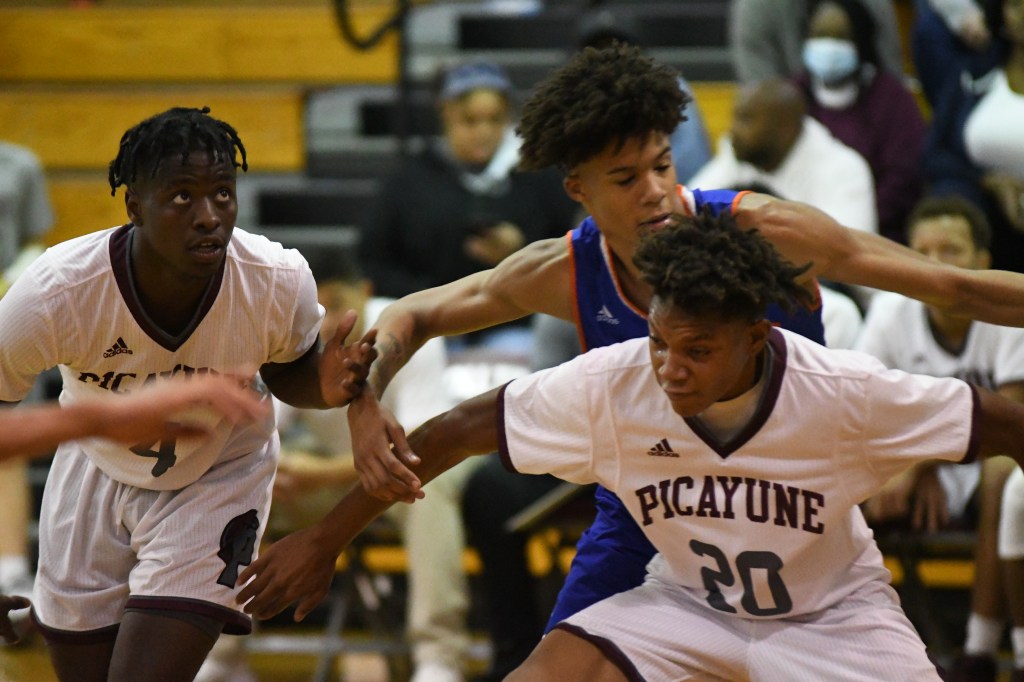 The Maroon Tide’s basketball team couldn’t hang on to win late in the fourth period against the Gulfport Admirals, dropping the team’s first game at home.

Gulfport won the opening tip and went up 8-6 over the Maroon Tide to start the game. Five minutes into the first quarter junior Tory Carter contested a layup and drew a foul. He missed the extra free throw but the Maroon Tide tied the game at 8-8. The Maroon Tide get a stop on defense and on the following play senior Issac Brice made a two handed slam assisted by junior Jahiem Everett. Giving the Maroon Tide the team’s first lead of the night at 10-8. The Maroon Tide defense and Picayune’s fans turned the energy up and caused Gulfport to commit back-to-back turnovers. Everett was fouled on a shot, but missed both free throws. Gulfport capitalized on the missed opportunity by hitting their first three pointer of the night and taking an 11-10 lead.

Gulfport regained possession before end of the first quarter, and tried to extend the lead but Picayune remained disciplined on defense and forced another turnover as Brice drew the charge.

Gulfport took a quick 12-10 lead to start the second quarter after going 1-2 at the free-throw line.

Picayune’s Troy Carter took a trip to the free-throw line and hit both at the line, putting the Maroon Tide within two at 14-12 with 4:50 left until the break. With 1:50 left until halftime, Carter drew another foul and shot his fourth and fifth free throws of the night. He went 1-2 at the line, making the score a one-point deficit at 14-13.

Gulfport became more aggressive on offense and drew another foul putting them at the free throw. Gulfport’s Zarius Gill made both bonus shots and extended his team’s lead to 16-13. That aggressive play on offense translated to Gulfport’s defense. The Admirals extended the zone to half court and the Maroon Tide couldn’t handle the pressure. The ball was turned over to Gulfport with 51 seconds left, then Picayune fouled on defense and Gulfport’s Ahmad Carter got the opportunity to both land both free throws extending the team’s lead to 18-13 going into halftime.

Down by five, Picayune responded with authority as Brice opened the third quarter with a two handed slam-dunk. After getting a stop on the defensive end, the Maroon Tide got the ball back to Brice on offense where he answered with a layup and cut their deficit down to one point, 18-17.

With two minutes left in the third quarter, the Maroon Tide tied the game at 20-20 after Carter hit a wing three, the first three pointer of the night for the Maroon Tide. Gulfport answered with a pull up jumper from Gill but during the next Maroon Tide possession Carter hit another three, this time from the corner giving Picayune its second lead (23-22) of the night with 50 seconds left.  Gulfport made a trip to the free throw line with one second left; Javier Simmons went 1-2 at the line as they trailed 24-23.

Gulfport continued their half court pressure in the fourth quarter but Picayune broke the pressure as Tyaon Terrell finished down low. Gulfport drew another foul and went 1-2 at the line but Terrell answered with another strong finish inside the paint, giving the Maroon Tide the lead again at 27-25. With 6:30 left in the game Brice was fouled and hit both free throws for a 29-28 lead over Gulfport. Gulfport continued to live at the free throw line as they drew another foul and shot 1-2, tying the game at 29-29 with 4:40 left.

Gulfport went down low to the post and scored over Picayune’s defenders. During the next possession, Brice went one-on-one in the post and was fouled. He hit both free throws and tied the game at 33-33.

With 1:45 left to play, Gulfport pushed the ball up the court in the fast break transition and Gill hit the extra free throw that put Gulfport up 36-33.  Picayune set up offense and junior Joshua Holmes pulled a deep three from the wing, tying  the game at 36-36 with 27 seconds left. The Maroon Tide’s athletes tried their best to stay solid on defense and avoid fouls but Gulfport’s Ahmad Carter got fouled and shoot and missed two free throws.

But Gulfport got the rebound and called a time out with 20 seconds left. Gulfport drew another foul after the time out. this time Gill hit both free throws and Gulfport led 38-36.

With 15 seconds left to play, Picayune tried to get a clean look at the rim but Carter’s layup to the basket was blocked as time ran out and the Maroon Tide lost grip of a comeback win.

Next for the Maroon Tide will be at home against the Salmen Spartans Nov. 18 at 7 p.m.