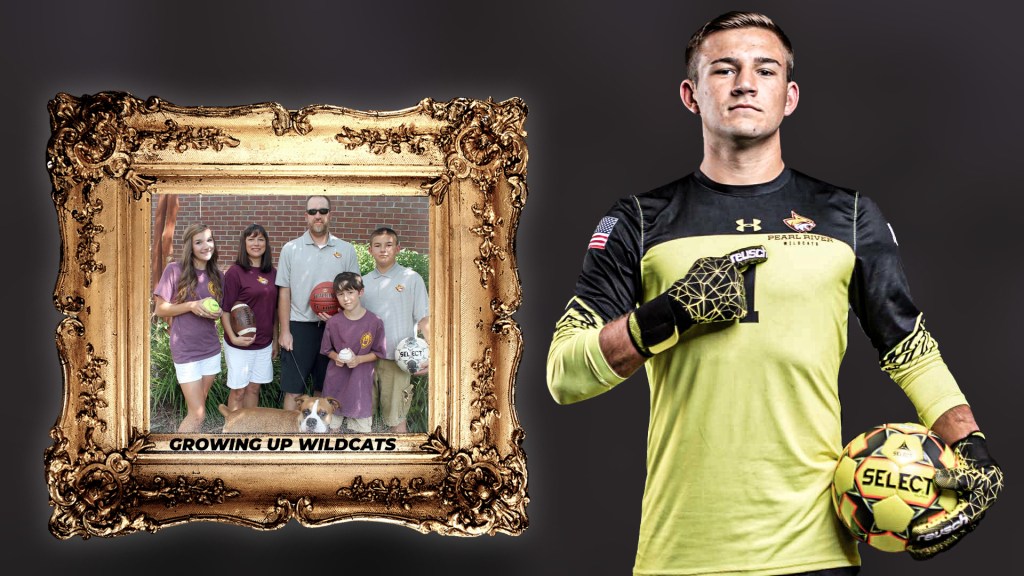 When the sophomore keeper pulls on his neon jersey and straps on his padded gloves Saturday ahead of PRCC’s MACCC/Region 23 Tournament semifinal match, he’s going to be looking to help lead his true hometown team to a championship — and hopefully more.

A postseason run would be huge for a proud program like PRCC’s soccer Wildcats. It would mean even more personally to Francis, who grew up right on Pearl River Community College’s Poplarville campus.

His father, Jason Francis, was a Wildcat basketball assistant coach and later became the college’s athletic director. Because of his father’s position on campus, Francis grew up surrounded by college athletes and had the Pearl River culture ingrained in him at a young age.

Francis’ first taste of involvement was on the basketball court.

“As a kid growing up here, one of Maddux’s first things that he got involved in was our basketball games,” Jason Francis said. “I was an assistant basketball coach at the time, and he was a mop boy. He would mop up the perspiration from the court when someone fell. He had a blast doing that.

“He would put on halftime performances after the String of Pearls would perform. He’d balance the broom on his chin, and he’d dance. He just loved being here.”

Francis also was able to get used to being around college athletes and see how they did things.

“It was cool growing up and having all the basketball players over for dinner and different things we’d do at the house,” he said. “Being exposed to athletics from a young age made me who I am today. I think it showed me what being a college athlete was like as a kid.”

It wasn’t long after his involvement with the basketball team that Maddux discovered his love for soccer. Pearl River soccer coaches invited him to come out and participate in their camps, and he was hooked from that point forward.

LOVING THE GAME
After spending time at camps, Francis discovered his love for goalkeeping and luckily for him Pearl River has a rich history of talented goalkeepers who wanted to help him get better.

“Pearl River had some incredible goalkeepers that came through and they took Maddux under their wing,” Jason Francis said. “They helped develop him and gave him confidence. He really learned to love the game from those guys.”

Through his mentors and long hours of practicing on the PRCC Soccer Complex’s field, Maddux eventually earned a scholarship to play soccer at William Carey University.

Francis spent a year at WCU where he learned a lot and continued to work on his craft but eventually decided to come home where it all began, transferring to Pearl River to wear the Wildcat soccer kit just like he’d always hoped to do.

“It’s always been a huge dream because I used to play for rec teams that they had here, and I used to practice on this field,” he said. “Growing up we’d have high school games on the field and watching every single game from the day I started playing soccer to now makes it huge to be part of this program.

“It’s really a blessing to wear this jersey every day.”

Added Jason Francis: “It was a dream of his to come here and play and wear that Wildcat logo on his jersey. It’s so cool to watch a kid live out a childhood dream. That’s exactly what we’re watching right now. He’s having so much fun.

“Maddux loves soccer, he loves Pearl River, and he wants to bring a championship back to Pearl River in the worst way.”

For men’s soccer head coach Drew Gallant, Francis has always been part of the Wildcat family.

“Honestly, we are just very lucky,” Gallant said. We’re the beneficiaries of the Francis family living here on campus. Maddux has always been around. He isn’t just part of the program, he’s part of the family.

“He really embodies everything that we represent here at Pearl River. Whatever goals that he sets for himself, he achieves them.”

INCREDIBLE SEASON
Francis and the Wildcats are in the middle of one of the greatest seasons in Pearl River history. The Wildcats have climbed the national poll and sit among the top two teams in the nation, holding an 11-0-2 record.

Pearl River is backstopped by Francis who has turned away 50 shots this season, allowing just three goals, two of which came on penalty kicks.

UP NEXT
The Wildcats still have a lot to prove on the season, competing in the first round of the MACCC/Region 23 tournament Saturday. The Wildcats take on Hinds at 6:30 p.m. The match will be livestreamed at PRCCMedia.com/gold.