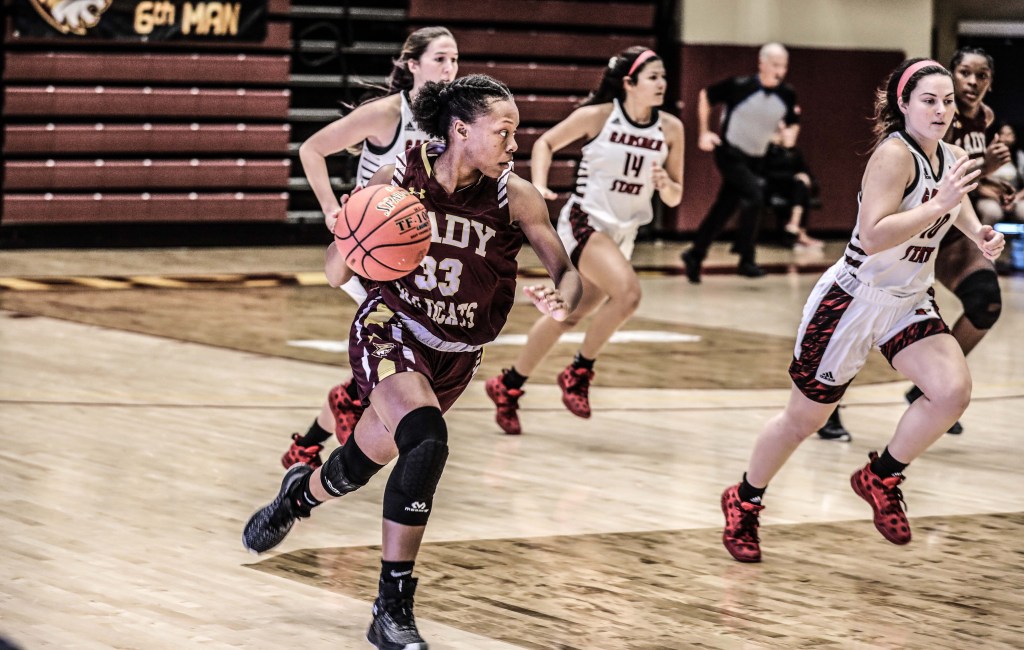 With the win, PRCC improves to 4-0 for the fourth time in six seasons.

“I’m really proud. We set a goal to limit them to 45 — and held them to 44. That’s pretty good,” Pearl River coach Scotty Fletcher said. “I thought we did a really good job defensively today.

“… I tell the girls every night, we have to allow our defense to create offense.”

Virtually from the opening tip the Wildcats were off and running. Leading 7-4 early on, the Wildcats scored 14 unanswered points to build a 21-4 advantage.

Tristen Washington (Gonzales, La.; East Ascension) opened the run with a putback. After a Marcavia Shavers (Biloxi) free throw, Brandy Scott (Hammond, La.) pickpocked a Cardinal guard and went coast to coast. Later in the run, Gabby Collier (Brandon) asserted herself by nailing back to back 3-pointers before Keshunti Nichols (Pearl) scored. Following a pair of Gadsden State free throws, Collier hit her third 3-pointer of the quarter for a 26-6 lead. The visitors went on a 5-0 run late in the first frame but Halle Traylor (Tupelo) nailed a 3 to beat the shot clock for a 29-11 advantage.

The second quarter was a bit more even, with PRCC taking a 43-26 lead into halftime.

The second half, however, was virtually all PRCC as Flethcer’s squad outscored the visitors 47-18 in the final 20 minutes.

Three different Wildcats scored in double figures for PRCC, with 13 earning their way onto the score sheet.

“What I like is right now we’re seeing any night it can be anybody,” Fletcher said. “Every night a different girl is stepping up.”

Collier turned in a career night, scoring a game-high 18.

“Gabby is a special individual, special player,” Fletcher said. “Gabby is a phenomenal young lady. She’s growing every day. I have been challenging her to stay in her shot.”

Washington finished with 16 points and was second on the team with four assists.

Fletcher said he felt the transfer was due for a breakout performance.

“She is coming along,” Fletcher said, adding he had texted Washington Thursday night to tell her she was due a big performance. “Sometimes these kids just need a little extra bump to get over the hurdle.

“She has played a lot of basketball and finishes extremely well. One thing I tell all the college coaches, she doesn’t do one thing great but does everything good.”

NEXT
PRCC returns to the hardwood Monday for a road trip to Delgado. Opening tip at DCC is set for 5:30 p.m. The Wildcats’ next home game is Saturday, Nov. 20 at 2 p.m. against Southern University-Shreveport.