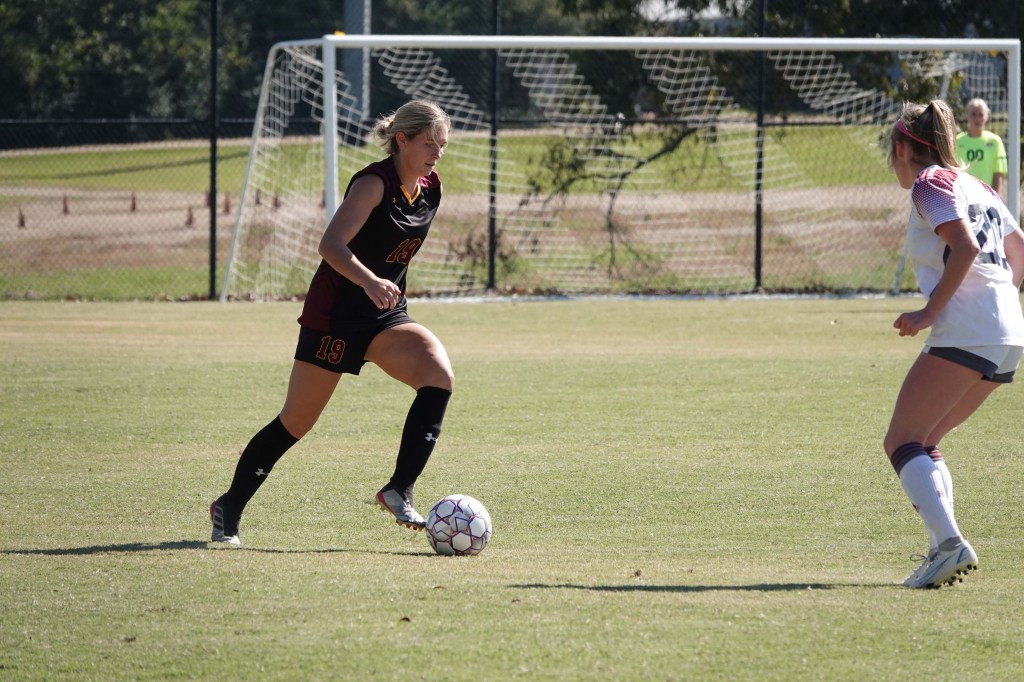 “I think that we had a really good season,” head coach Henrik Madsen said. “We brought in a lot of new players, and it took some of them some time to adjust. Once we adjusted, we were really good. For being unranked and receiving no votes, taking the No. 3 team in the country to overtime is great. I’m really happy with my girls they really played their hearts out.

Pearl River (8-6-2) had several great moments throughout the season, starting the year off by taking down then No. 2 Holmes. The Wildcats then went on to finish the season with a 5-3-2 conference record.

The Wildcats played hard down the stretch of the season, going 3-0-1 in the team’s last four matches to force its way into second place in the MACCC South.

The Wildcats then toppled Itawamba in the first round of the playoffs to set up the matchup with Holmes.

FIRST HALF
Holmes was on the attack from the start, developing chances quickly.

In the 8th minute, Holmes stepped forward and booted a shot on goal that hit the top of the crossbar and shot out of bounds.

Just six minutes later, Holmes (13-1-2) nearly got on the board again, hitting the crossbar square in the middle before bouncing out of bounds.

In the 33rd minute of the contest, the Bulldogs developed another solid attacking chance before smacking a shot on goal. Pearl River’s Aníta Guðmundsdóttir (Kópavogur, Iceland.; Flensborg) took two steps to her left and plucked the shot out of the air.

As the half was drawing to a close, Pearl River had a chance to counterattack. Sydney Salter (Vancleave) drove down the right side of the field but was unable to find the last pass.

SECOND HALF
The second half of play started similarly to the first half with the Bulldogs hitting the crossbar in the 52nd minute. The ball bounced around before it was cleared out by a Wildcat centerback.

Holmes earned a penalty kick attempt in the 60th minute after a handball in the box was called. The Bulldog forward stepped up to take the shot, but her attempt sailed wide of the net.

Pearl River got on the board first in the 65th minute of play. After Lucy Conway (Portsmouth, England) played a ball into the box, Aubrie Edwards (Biloxi) smacked a shot off the volley and into the top of the net just above the leaping Bulldog keeper to give Pearl River the lead.

“That was Aubrie magic,” Madsen said. “It was a cross in and she somehow volleyed it even though she was facing the wrong way and she found the back of the net.

“It was special. That’s what Aubrie can do.”

While it seemed as if all the momentum was on the side of the Wildcats, one mine later another penalty kick was awarded. This time, the Bulldogs placed it into the back of the net to tie the game up 1-1.

Salter had a chance to give Pearl River the lead in the 81st minute, but her shot attempt was punched away by the Bulldog goalkeeper.

The 85th minute saw Edwards pick off a pass from the goalkeeper before smacking a ball to the far post, but the keeper stepped to the side and caught it.

Emma Godfrey (Pascagoula; Resurrection Catholic) nearly sent the Wildcats in hysterics with under 15 seconds left in the match. The Wildcat defender found a ball that was played into the box with her head, nailing it toward the goal. It clanked off the center of the post before bouncing out of bounds. The teams then entered into overtime.

The Wildcats were unable to find many attacking chances in the first few minutes of the overtime period.

Just three minutes into the first overtime, Holmes stepped up to take a shot on a set-piece. The shot deflected off of a player before rolling into the net, ending the game 2-1.