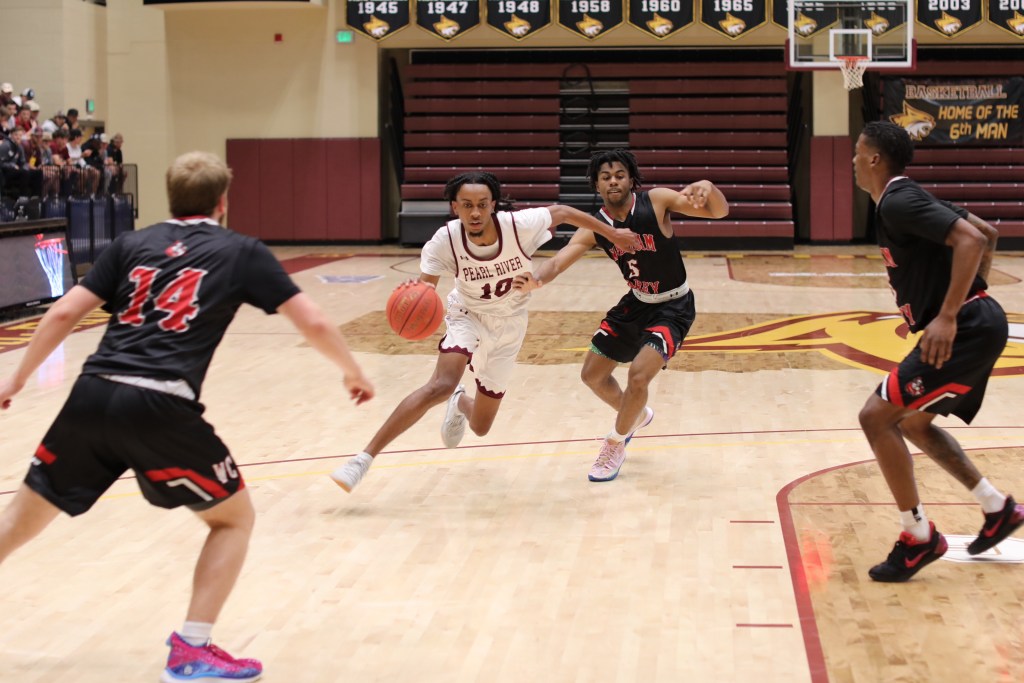 BATON ROUGE, La. — The Pearl River men’s basketball team had to gut through a slow start but ultimately established their dominance Thursday in a convincing 83-53 win at Baton Rouge.

“I think it was to be expected playing our first road game as a team. They came out ready to play. I thought we did too, it just took us a little while to get used to the rims and the environment,” Pearl River coach Chris Oney said. “One reason I never panicked, however, was because our defense stayed consistent.”

The two teams traded points in the middle portion of the first half, with BRCC (0-3 overall) jumping out 25-18.

Following a free throw Earl Smith, Jr. (Jackson; Lanier), Jair Currie (Albany, N.Y.; St. Thomas More) nailed a 3-pointer and then Smith drained one off a cross-court pass from Cameron Brown (Hattiesburg) to tie the game 25-25. Following a BRCC free throw, Currie hit two free throws to give the Wildcats their first lead since early in the half. BRCC briefly tied the game 27-27, but Jaronn Wilkens (Biloxi) scored in traffic and Allen hit another 3-pointer with just under 90 seconds remaining to help give the Wildcats a 32-29 lead at the break.

SECOND HALF
The Wildcats carried over the momentum into the second half. Jariyon Wilkens scored in transition to open the second and following a Waller layup, the aforementioned Wilkens brother converted an and-one to extend PRCC’s lead to 39-31. Smith then converted two free throws to cap PRCC’s 7-0 run.

An Allen 3-pointer followed by a Jaronn Wilkens layup all alone in the post gave PRCC its largest lead to that point at 46-34.

The Wildcats only continued to pile on from there.

“I thought tonight was a complete team effort,” Oney said. “Unlike last year, we have guys who can come in and pick up the slack when other guys are off. That really showed tonight.

“Guys like Brumfield, Brison and JD all played great.”

NEXT UP
The Wildcats return to action Monday with a rivalry matchup against Mississippi Gulf Coast. Opening tip inside Marvin R. White Coliseum is set for 6 p.m.

Season and single-game tickets are available now and can be purchased at PRCCAthletics.com/tickets.