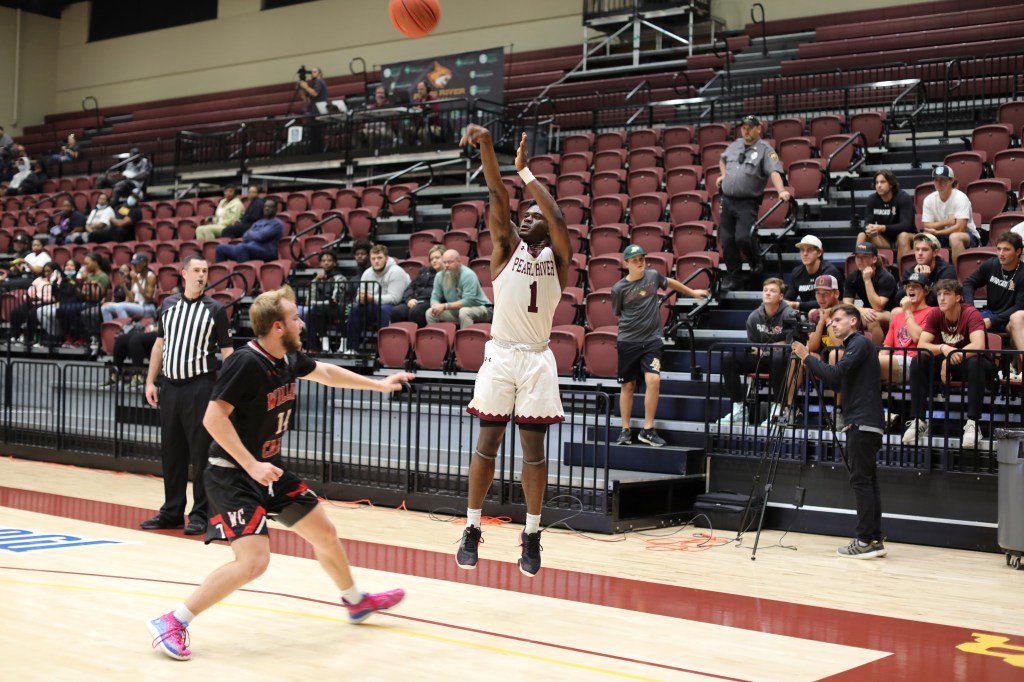 POPLARVILLE, Miss. — The Pearl River men’s basketball team was dominate from opening tip to the final buzzer Monday, blowing past William Carey JV 100-32.
“I thought that we were playing too slow early in the game, but that could be me nitpicking,” head coach Chris Oney said.
“I thought that we didn’t take advantage of some opportunities. We did play really good defense tonight, but once we got the ball back we just didn’t capitalize on every opportunity.”
FIRST HALF
Pearl River (1-0 overall) was off and running right from the start of the contest, jumped out to an 8-3 lead.
After Brison Waller (Cleveland, Ohio.; Garfield Heights) plucked a pass out of the air he went coast-to-coast for the big two-handed slam.
The Wildcats continued to put the pedal to the metal going on an 11-3 run that made the score 19-6 with 11:31 left in the first half of play.
The run was highlighted by a fast break score. Dylan Brumfield (Hattiesburg; Oak Grove) stole a pass from the William Carey JV (0-1) guard, found an open Jariyon Wilkens (Biloxi) who sailed through the air for the slam.
The Crusaders fought back to cut the deficit to just 11, but it was all Wildcats from that point forward.
After a missed free throw, JaRonn Wilkens (Biloxi) rebounded the ball, fought through some contact and laid the ball up to make the score 22-11.
Just a few minutes later, Alex Jordan (Hattiesburg) received a pass from Jair Currie (Albany, N.Y.; St. Thomas More) and drained his first collegiate 3-pointer to make the score 26-11.
The Wildcats took a 20-point lead shortly after as Brumfield faked a shot to draw the defender before passing off to Cameron Brown (Hattiesburg) who drained the 3-pointer.
With 3:14 left in the first half, the Brumfield to Brown connection struck again for another 3-pointer.
The Wildcats made the score 42-16 as they neard the break when Jariyon Wilkens passed the ball to his brother JaRonn Wilkens who emphatically dunked the ball.
The last Wildcat points of the first half came courtesy of Ankerion Gross (Sardis; North Panola) who hit from beyond the arc after an Earl Smith, Jr. (Jackson; Lanier) pass.
The Wildcats entered the break ahead 45-20.
SECOND HALF
Pearl River opened the second half on fire, scoring an incredible 33 points before the Crusaders got on the board for the first time.
The period got underway with three consecutive baskets from Waller, the last of which came on a one-handed slam that made the score 51-20.
Smith slammed home a Currie pass to make the score 62-20 just a few minutes late.
The run was capped off by a layup from Preston Turner (Laurel; West Jones) and made the score 79-22.
Carlous Williams’ (Hattiesburg; West Harrison) layup pushed the Wildcats over the 80-point mark to make the score 81-25.
Pearl River eventually saw itself in a pursuit of triple-digits, taking an 88-30 lead with just a few minutes remaining in the contest.
Smith boxed out a WCU player to grab an offensive rebound and quickly put it back up to go ahead 90-30.
After another quick Pearl River basket, Gross caught a pass from J.D. Allen (Brookhaven; Wesson) and quickly shot a 3-pointer to make the score 95-32.
Smith put another layup into the basket to put the Wildcats just three points shy of the 100-mark.
With time under 30 seconds, the Wildcats rushed down the court and Nykie Jackson (Trenton, N.J.; The Patrick School) hit nothing but net from beyond the arc to make the score 100-32.
The score held as the Wildcats claimed their first win of the year.
STATISTICALLY SPEAKING
Waller and Jordan tied for the team lead in points with 14. Jordan was 3-for-7 from beyond the arc.
JaRonn Wilkens and Brown were second and third with 13 and 11, respectively. Allen also hit double-digits, scoring 11 points.
Smith led the team in assists with nine and Currie assisted seven times.
JaRonn Wilkens led the team in rebounds with eight.
UP NEXT
Pearl River returns to action Wednesday as Baton Rouge comes to Marvin R. White Coliseum. The game is set to tipoff at 6 p.m.
TICKETS
Season and single-game tickets are available now and can be purchased at PRCCAthletics.com/tickets.
TUNE IN
All home Pearl River basketball games are livestreamed for free at PRCCMedia.com/gold. Fans who have Roku, Amazon Fire or Apple TV devices can also watch the Wildcat broadcasts by downloading the “Pearl River CC” channel from their app stores.
Games can also be heard on WRJW 1320-AM, 106.9 FM and WRJWRadio.com
For the latest on Pearl River Community College athletics, follow us on Twitter (@PRCCAthletics) and Facebook (PRCCAthletics).