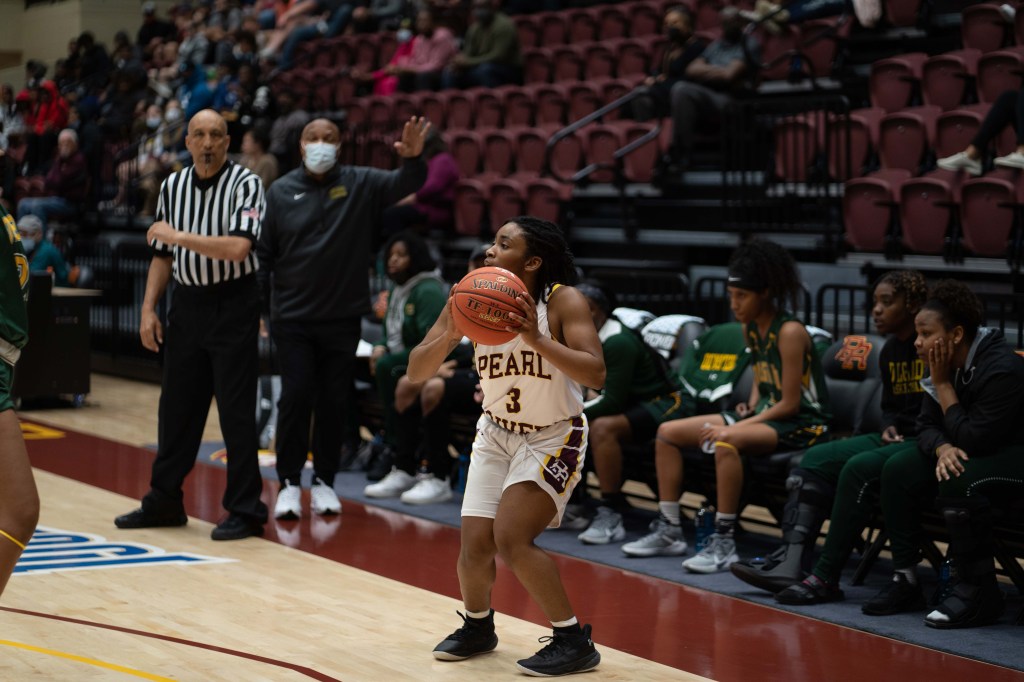 POPLARVILLE, Miss. — The Pearl River women’s basketball team bounced back from a sloppy first quarter to run away with its game against Snead State, winning 80-43.

“I don’t want to be greedy, but three games in I want us to be playing like we’re 23 games in,” head coach Scotty Fletcher said. “There’s a standard here. Guarding and playing defense and disrupting the other team is something we pride ourselves on. I think we guarded well tonight.”

FIRST QUARTER
Pearl River (3-0 overall) jumped out to a 7-4 lead early in the game as Otashae Burrage (Carthage; Leake County) nailed a 3-pointer and Halle Traylor (Tupelo) knocked down all four of her free-throw attempts.

After a miss, Brandy Scott (Hammond, La.) scooped up the offensive rebound and put the ball back up and into the basket to make the score 11-9.

The Parsons picked up another basket before Burrage received a pass from Keshunti Nichols (Pearl) and floated a ball into the basket to make the score 13-11.

SSCC jumped ahead 17-14 on a jumper with 1:45 left in the first quarter, but the Wildcats grabbed all the momentum.

TyRaven McGowan (Jackson; Murrah) stole a ball from a driving Parsons guard and dished the ball off to Jaliscia Florence (Tupelo). Florence then heaved a ball down the court for the sprinting Burrage who came to a stop before getting an easy layup, making the score 17-16.

Pearl River retook the lead 18-17 just before the buzzer sounded with another Burrage layup.

SECOND QUARTER
Just a few seconds into the second quarter of play Gabby Collier (Brandon) received a pass from Ty’Mesha Reed (Meridian) and nailed a 3-pointer to make the score 21-17.

Just a few moments later Anessa Dussette (Houston, Texas.; Manvel) fought through contact and laid a ball up to make the score 26-17.

After another Pearl River basket, Reed hauled in a rebound and drove down the court. She went into the lane and dished out to the corner for Dussette who knocked down a 3-pointer.

With 4:32 left in the game, Marcavia Shavers (Biloxi) rebounded a pass and put it back up to make the score 33-19.

The Wildcats saw themselves jump out to a 38-19 lead when Reed hit a 3-pointer after a pass from Burrage.

One play later, Reed stole the ball away from the guard and traveled down the court for a layup, making the score 40-19.

Pearl River eventually ended the half on top 43-23.

THIRD QUARTER
Right out of the half Traylor knocked down two free throws to make the score 45-23.

The Wildcats chipped in a few points before finding themselves up 50-29 midway through the third quarter.

SSCC knocked down a three and on its next possession, Scott stole a pass and went coast-to-coast for a layup to make the score 52-32.

After another Pearl River basket, Smith saw an SSCC pass coming and darted from the wing to knock it away. She then took it all the way to the basket for a layup to make the score 56-32.

The Wildcats added on another basket to take a 58-32 lead into the fourth quarter.

FOURTH QUARTER
The Wildcats took a 63-32 lead right out of the half as Traylor knocked down a 3-pointer off of a pass from Smith.

Pearl River took a 70-39 lead later in the corner and shortly after Nichols caught a ball at the top of the arc and hit nothing but net for a 3-pointer to make the score 73-39.

Pearl River’s final point of the night came as Dussette drove into the lane and dished a no-look pass to Nichols for an easy layup.

LEADING THE WAY
Burrage led the team in points with 15 and Traylor finished in second with 10.

Dussette and Reed tied for the team lead in assists with four.

Leading the team in rebounding were Shavers and Taylor with six and five, respectively.

Smith tallied five steals on the night and chipped in seven points.

Pearl River returns to action Friday at 2 p.m. against Gadsden State. The game will be livestreamed at PRCCMedia.com/gold.