No. 2 Pearl River topples Hinds to advance to MACCC/Region 23 Championship 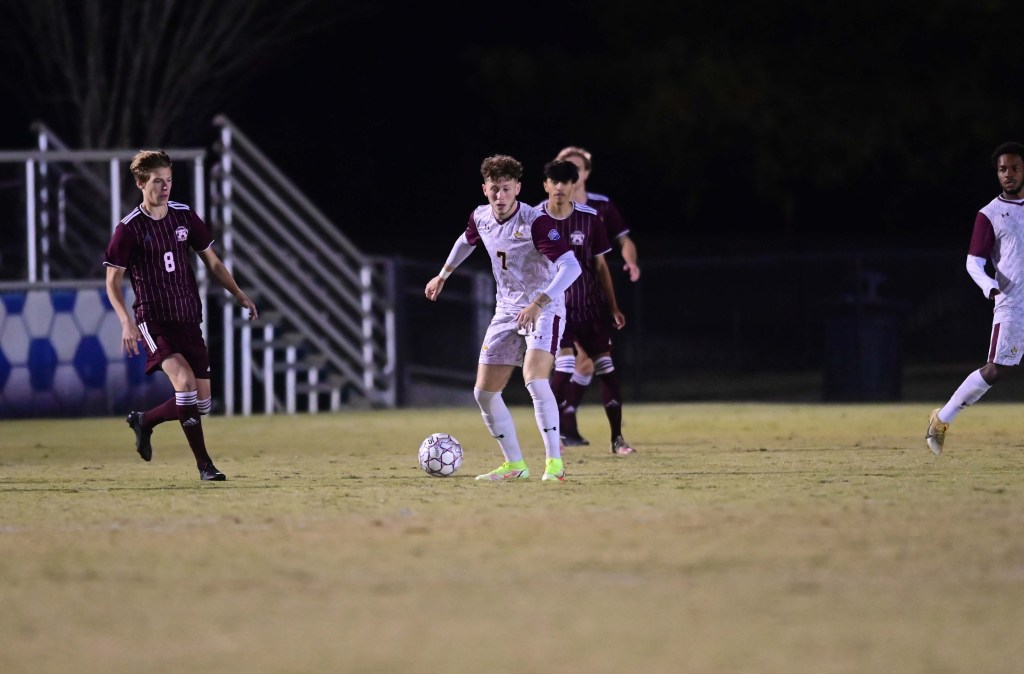 RIDGELAND, Miss. — The No. 2 Pearl River men’s soccer team received a late goal in Saturday’s match against Hinds, scoring in the 80th minute to earn a 2-1 victory.

“I feel like we weren’t patient,” head coach Drew Gallant said. “We saw space and just looked to get forward every time, but that doesn’t suit us. We’re hoping for a better performance from the boys tomorrow. We came away with the win, so I’m happy with that.”

Gallant gave credit to Hinds for a tough match.

“Doug (Williams) is a great coach,” he said. “There’s a reason he’s won so many games and titles. They’re always coached really well, and they work really hard. Every year you know what you’re going to get from them.”

The victory over the Eagles sets up a MACCC/Region 23 Championship match against archrival Gulf Coast.

“Gulf Coast, rivals, 30 minutes away,” Gallant said. “We could see it coming. It’s been coming. It’s the toughest game of the year every time we play. It’s a higher pace and a higher tempo. They’re a very good team that deserves to be in the finals.

“We’re going to have to show up and play at our best.”

Pearl River (12-0-2) was putting the pressure on Hinds (7-3) right from the start, holding possession of the ball on the Eagles side of the field for the majority of the first 10 minutes of play.

In the 10th minute, the Wildcats put the first point on the board. Ryley Smith (Manchester, England; Castlebrook) stepped up to take a corner kick and booted it to the box. Jamie Chamberlain (London, England; Dover Athletic Academy) jumped high to head the ball home, giving the Wildcats an early 1-0 advantage.

PRCC earned a free-kick from around 19 yards out in the 32nd minute. Smith shot the ball but hit the crossbar directly in the middle. The ball bounced around and fell to Julio Cezar (Curitiba, Brazil) who put the ball into the net, but the line judge’s flag was held high to rule him offside.

Not long after, Mohamed Diallo (Gulfport) clanked a shot off the crossbar, but the rebound was cleared away by an Eagles defender.

With less than a minute left in the first half of play Hinds equalized. A ball found an Eagle forward who unleashed a laser into the net and past the diving Maddux Francis (Poplarville).
The teams entered the break knotted up at one each.

Immediately into the second half of play, the Eagles won a free-kick but their shot sailed way above the net.

From that point forward, Pearl River lived in Hinds’ half of the field, creating chance after chance.

The Wildcats nearly took the lead in the 57th minute when a lofted-through ball was tracked down by Harper Baggett (Ocean Springs). The Wildcat center forward tried to smash it home, but the Eagle keeper deflected it back outside of the box. Alex Emery (Gulfport; West Harrison) tried to hit it in on the deflection but his shot sailed wide.

The 62nd minute saw another header chance for Chamberlain, this time it went high and out of bounds.

In the 74th minute, Diallo stole a pass away from an Eagle midfielder and drove down the right side of the field; however, his cross attempt went behind the net.

The Wildcats finally retook the lead in the 80th minute of the night. Smith sliced a ball into a crowd of players and Emery sprinted forward and jumped to head the ball. His header attempt lofted high and fell into the net to give the Wildcats the 2-1 lead.

When asked about his goal, Emery gave the credit to his teammate.

“Just a shoutout to Ryley for putting that cross in to me,” Emery said. “The credit just goes to him. He put it up there and I did what I was supposed to do by finishing it.”

Smith mentioned that the set-piece success has been coming.

“It’s huge on a personal note of course, but also for the team,” he said. “We’ve been trying to perfect the set pieces and luckily today they came, we were very fortunate.”

Hinds had another chance to even the scoring, but the Wildcats were able to clear away the attempt to close out the game.

UP NEXT
Pearl River returns to action tomorrow as they take on archrival Gulf Coast at 2:30 p.m. in the MACCC/Region 23 Championship. PRCC plans to livestream the matches at PRCCMedia.com/gold.