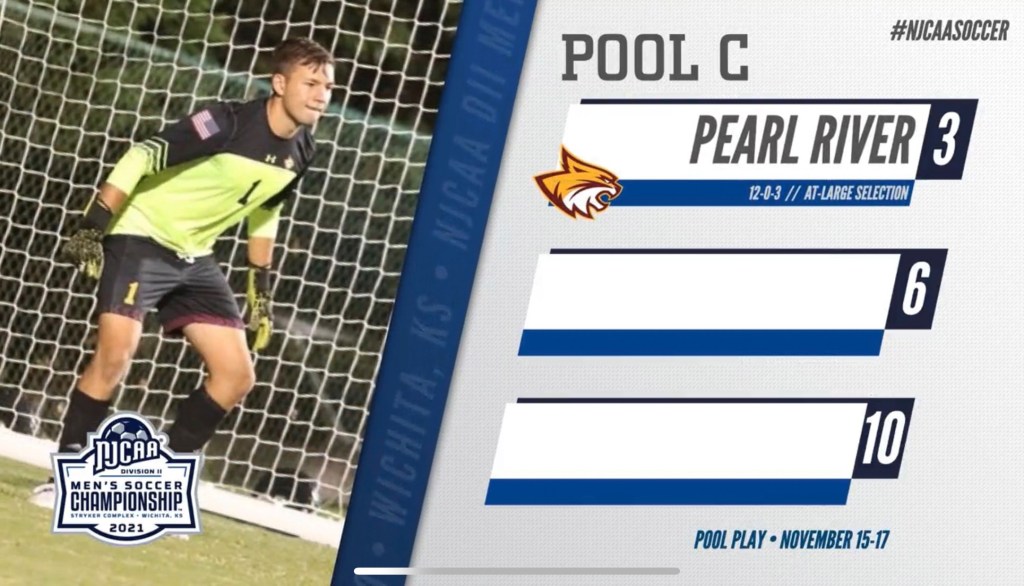 POPLARVILLE, Miss. — It’s been a long time coming for the Pearl River men’s soccer program and for the first time in program history the team is headed to the National Junior Colleges Athletic Association Division II Tournament. The tournament is being hosted at the Stryker Complex in Wichita, Kansas and will run from Nov. 15-20.

“We couldn’t be more excited for the players to showcase their talents at the national tournament,” head coach Drew Gallant said. “It’s a great chance for us to represent Pearl River and gain national exposure for the team and players.”

“We are elated that our men’s soccer team gets the opportunity to keep their postseason hopes alive and their quest for a national championship in front of them,” he said. “Our players, coaches, support staff and families deserve another chance to watch our men suit up and represent our great institution while producing a historic season.”

Fletcher also added: “Coach Gallant has proven himself as one of the top coaches in the country,” Fletcher said. “He has executed his vision of being dominant in our state, which is extremely competitive. We are incredibly proud of his success here at Pearl River Community College and look forward to supporting them next week as they represent the great state of Mississippi.”

“I think our selection is fully deserved after the season that we’ve had,” Chamberlain said. “I think throughout the whole season we’ve all worked hard; we’ve all put in the work. The work rate has been there all season and that’s how we got this far. People are starting to recognize that we are good enough to compete with the best teams in the nation.”

Freshman forward and leading scorer Harper Baggett (Ocean Springs) talked about how excited he was to make the trip to Kansas.

“It’s huge getting into this tournament,” Baggett said. “We finished the season undefeated, which I think really helped us. We worked very hard for that. I feel like we fully deserved our seeding.

“I’m so pumped for the trip to Kansas. It’s going to be a cool experience for all of us. We’re prepared and ready to go.”

ABOUT THE GROUP
Pearl River (12-0-3) earned an at-large bid and was named the 3-seed in the 12-team tournament.

St. Charles averages 2.6 goals per game and has a 0.67 goals-against average. Phoenix College has scored 65 goals on the season, averaging 4.33 per game. The Bears also allow 1.26 goals-against. PC scored double-digit points in three games on the season.

The group will be a round-robin with the top team advancing to the knockout stage.

ABOUT THE WILDCATS
Pearl River earned the at-large bid after finishing the season with a 12-0-3 record, climbing as high as No. 2 in the NJCAA poll.

The Wildcats cruised through MACCC play, finishing the year with an unblemished 9-0-1 conference record.

PRCC has the stingiest defense in the country, giving up just six goals this season and holding a goals-against average of 0.42.

The Wildcats have outscored opponents 39-6 this season and have collected 10 clean sheets on the year.

Pearl River is backstopped by goalkeeper Maddux Francis (Poplarville). Francis’ .903 save percentage and 0.43 goals-against average both lead the country.

Baggett leads the team in goals with 10 and has assisted on five. Mohamed Diallo (Gulfport) checks in at the two-spot with eight goals and five assists.

HOW TO WATCH
All matches throughout the tournament will be livestreamed at NJCAATV.com