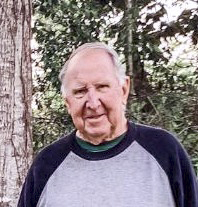 Marty was born April 11, 1941, in Quincy, Illinois, and answered his final call to duty Monday, November 22, 2021, at his home in Carriere, Mississippi.  He enjoyed an active retirement after serving 30 years in the U. S. Naval Reserve.  He especially enjoyed golfing with his friends and arguing about politics.

Marty attended the University of Missouri School of Mines and Metallurgy where he received a Bachelor of Science in metallurgical engineering.  Prior to entering the Navy, he was a process engineer for Olin Mathison Corporation.

He leaves his loving wife, Alice Williams McGrath and two sons of whom he is very proud, Sean McGrath of Round Rock, TX, and Chris Rova (Chynna) of Picayune, MS.  He also leaves four delightful grandchildren: Kiley Raines, Carriere, MS, Delilah and Weston Watts, and Penelope Rova, Picayune, MS.  Marty will be missed by a host of good friends, relatives, and golfing buddies.

Burial will be at Arlington National Cemetery, Washington D. C., held by family.