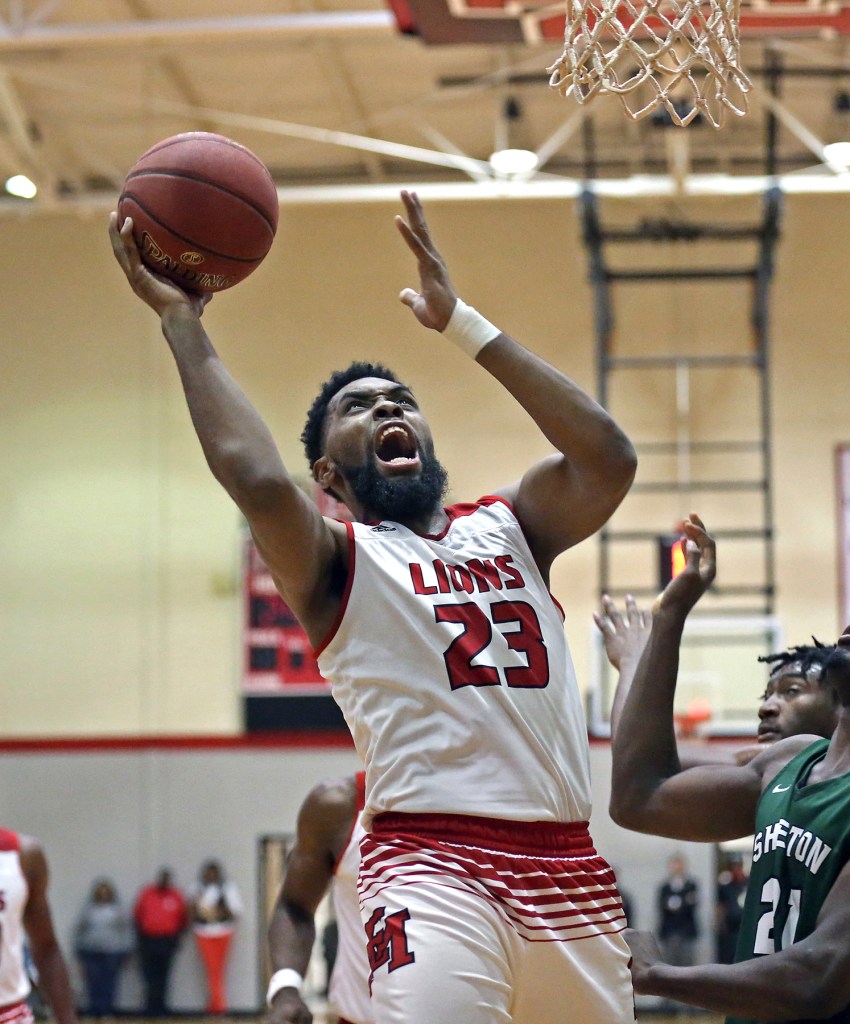 In women’s action to tip off Monday’s doubleheader on the Scooba campus, the visiting Shelton State Lady Bucs proved why they’re currently ranked sixth nationally with a dominating 85-47 victory over EMCC’s Lady Lions.

Having earlier in the month played John A. Logan College down to the wire in a hard-fought 80-76 loss to the nation’s third-ranked men’s team on a neutral floor in Vincennes, Ind., the EMCC Lions came out sharp following the Thanksgiving holiday break by scoring the game’s first nine points against Shelton State.

Once the visitors settled into the game, the two teams battled to within a six-point margin for the remainder of the overtime thriller.  The Bucs grabbed a narrow 37-36 halftime lead with a late 8-2 run heading into intermission.

Following the halftime break, the closely contested game became even more competitive during a second half that featured five ties and six lead changes.  After the Lions grabbed a pair of five-point leads with the help of second-chance points off offensive rebounds and timely contributions off the bench, Shelton State moved ahead by three points late in the half.

Coming down the stretch, Jakorie Smith’s four free throws and a Blake Butler basket helped put EMCC on top, 70-67, with 38.3 seconds remaining in regulation.  Antonio Thomas’ game-tying 3-pointer with 23.4 seconds left then set the stage for a dramatic finish to regulation that extended the instant classic.

Willie Johnson capped an impressive 18-point second half by converting an EMCC miscue into a three-point play to give Shelton State a 73-70 lead with only 4.5 ticks left on the game clock.  With the Lions having to go the length of the floor, Butler found Danny Washington at the top of the key for a game-tying trey at the buzzer to send the contest into overtime.

The lead changed hands three more times at the beginning of the extra session before Smith sank two more free throws and then converted a three-point play to give the Lions an 82-78 lead with 2:18 remaining in overtime.  Johnson continued his outstanding play into overtime by scoring on two more drives to the rim plus hitting a pair of charity tosses to knot the score at 82-82 with 25.4 seconds remaining.

With Butler again isolated one-on-one during EMCC’s final possession, the Louisville, Kentucky native made amends for his earlier turnover at the end of regulation by hitting the game-winning floater in the lane.  Shelton State did have one last rushed opportunity, but Thaddeus Williams’ deep three-point attempt misfired as the final buzzer sounded.

The 5-2 EMCC Lions featured balanced scoring with four players in double figures and another (Traemond Pittman) with nine points.  Smith and Butler tallied 19 points apiece in addition to adding seven and six rebounds, respectively.  Butler also handed out five assists.  Nick Walker registered his 10th career double-double and fifth of the season with 16 points on 6-of-9 shooting to go along with his 11 rebounds.  Washington finished with 13 points, including a trio of made 3-pointers.

Shelton State’s Johnson led all scorers with 29 points, while Andres Burney and Thomas followed with 17 and 10 points, respectively, for the visitors.

As the final score indicates, the women’s contest was all sixth-ranked Shelton State from the opening tip-off to the final buzzer.  With EMCC failing to make a field goal through the opening 10 minutes of play, the Lady Bucs mounted a 23-3 lead following the first quarter.

Though EMCC outscored the Lady Bucs, 16-15, in the third quarter, the visitors proceeded to build a 40-point margin (81-41) late in the game on Taylor Smith’s 3-pointer.

For the 3-4 Lady Lions, Siarra Jackson and Kyunna Thomas combined to score 30 of EMCC’s 47 total points in the game.  Thomas recorded her fifth double-double in seven games this season with 14 points, including 13 points coming on 6-of-9 shooting following halftime, to go along with 10 rebounds.  Jackson’s team-high 16 points featured 5-of-8 accuracy from the field and 6-of-7 from the line.

The East Mississippi basketball teams will open the MACCC regular-season schedule Thursday (Dec. 2) by taking on Northwest Mississippi at respective campus sites.  EMCC head coach Sharon Thompson’s Lady Lions will play host to the Northwest women at Currie Coliseum in Scooba, while head coach Billy Begley’s Lions will meet the NWCC Rangers at Howard Coliseum in Senatobia.  Both contests are slated to tip off at 6 p.m.