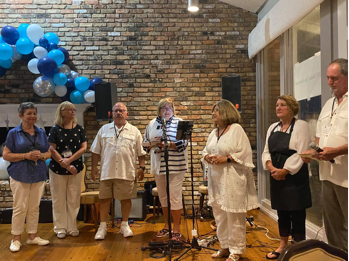 The HAWL Foundation Board of Directors speak during the most recent fundraiser held a fundraiser to provide scholarships to students who live within the gated community. From left are Board members Sue Gibilterra, Terri Tomlin, Tom Gibilterra, Beth Ennis, Ann Graham, Kathy Busco, and Ed Ennis. Photo submitted

On the night of October 2, 2021, the Scholarship Foundation for Hide-A-Way Lake Students put on its third White Linen Night.

Due to threat of rain later that evening, the party was moved from the pool to indoors at the Hide-A-Way Lake lodge.

More than 130 attendees enjoyed an evening of food tastings, refreshments, music, and a silent auction with 48 items up for bid. Local restaurants such as Hide-A-Way’s Waters Edge, Fatty’s Seafood, The Italian Grill, Southern Char Steakhouse, Stonewall’s BBQ & Catering and the newly opened Los Rancheros Mexican Restaurant provided the meal. The silent auction included original art, donations by local businesses and a large variety of gift baskets. The baskets ranged from holiday themed items to groupings of items of interest to many who attended.

The Scholarship Foundation for Hide-A-Way Lake Students is a non-profit organization of HAWL residents. The Foundation’s mission is to provide scholarships to graduating students who live within HAWL or equivalent achievement to be used for the student’s ongoing educational needs for either college or vocation. The Foundation secures its funds through individual donations and fund-raising events.

During the White Linen Night, two of the four recent scholarship winners attended the event to celebrate their success and convey their current status.

The event raised more funds for 2022 scholarships than either of the previous two White Linen Nights. The Foundation Board would like to thank all who attended and, especially all who donated to this ongoing initiative.