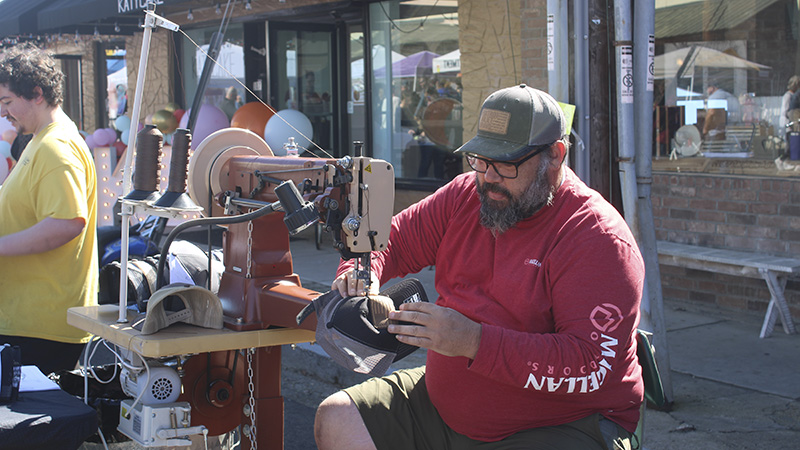 Kyle Jeansonne of River Banks Engraving puts final touches on a hat for a Street Festival attendee during the fall edition of the biannual event. Photo by David Thornton Jr.

The Street Festival held last weekend was a huge success, which included 82 local businesses as vendors and featured 200 total vendors and food trucks.

“It’s better than what we’ve had in the previous events, and I still encourage local artists and people to get involved, because we have a lot of talented people here and I just want to show off what they can do,” said Picayune Main Street Inc. Director Reba Beebe.

Hosting a biannual street festival isn’t easy when facing obstacles to provide a safe yet fun environment, but combined with staff shortages and less volunteers setting up this year’s event was a challenge.

But Beebe said the Main Street staff is “pretty mighty.”

“We have a great team here and we got it all worked out,” said Beebe.

For clothing store owner Catie Spiers, this was her first time being a vendor during the local Street Festival. Spiers started an online boutique in back July 2020 and opened a physical location in Picayune called Originally Styled Clothing just a year later in July of this year.

Originally Styled Clothing got a lot of traffic during the two day event.

“We probably tripled, maybe quadrupled our sales in an average weekend,” said Spiers.

Spiers appreciated seeing so many vendors get attention and recognition from the community at the street fest.

“It was really cool to see all the different places come together,”

Speirs noticed that every vendor at the event was focused on getting their brand noticed and make the most sales possible.

Al Spillman owns an outdoor furniture store called Bayou Cedre in Picayune and had his products up for sale during the Street Festival.

“It went really well, it was the best Street Festival I ever had,” Spillman said.

He said the event led to at least a doubling of his sales compared to previous Street Festivals in which he has participated. In addition to the increase in business, he fond new connections with business and residents, and increased his number of customers.

“It was good exposure,” said Spillman.

Even though Spillman wasn’t the only vendor selling furniture at the festival, he liked seeing the other businesses there because it added to his competitive spirit.

“I love the competition and giving people options,” Spillman said.

He also added, “Picayune Main street did an awesome job this year.”