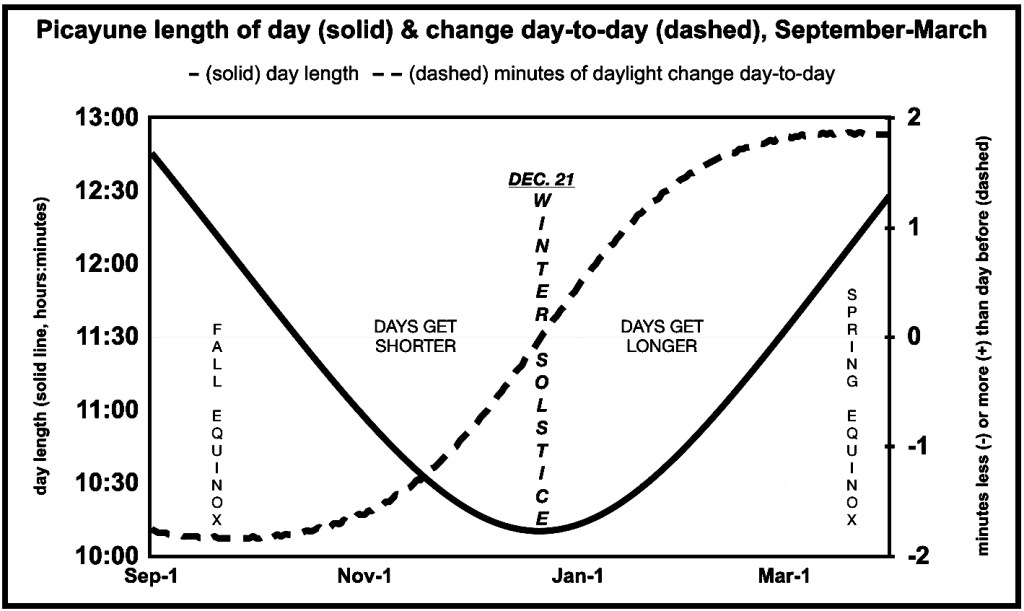 Are you tired of it getting dark earlier and earlier each afternoon? Do you not have enough light to get outdoor chores done after you get home from work?

I have good news. Our earliest sunset occurs on Friday, December 3rd at 4:57 PM, after which sunset will start getting later each day. That’s the date for everyone who lives the same distance north of the equator as we do.

Before you start planning what to do with the extra afternoon sunshine, you should know that we are only talking about seconds, not minutes. Even by the end of December, sunset will still be coming at the relatively early time of 5:09 PM.

You might think that the latest sunrise and earliest sunset would occur on the winter solstice, the date of our shortest day and longest night. One reason it doesn’t is because of a quirk in our timekeeping system, which assumes that it takes exactly 24 hours for the earth to make a full rotation with respect to the sun. While 24 hours is the average, the length of the actual solar day varies by a matter of minutes over the course of the year because the Earth’s axis of rotation is tilted, and its orbit around the sun is not circular but elliptical.

The graph included here shows both the total hours of daylight each day from September through March, as well as how many minutes less or more of daylight a day has compared to the day before. Daylight duration shrinks the fastest during the several weeks before and after the fall equinox in the third week of September, but changes very slowly from day-to-day in the weeks around the solstice.

If you feel deprived of daylight as we approach our minimum of 10 hours and 10 minutes in middle and late December, you might think of folks in Boston (9 hours 5 minutes) or Seattle (8 hours 25 minutes). Or, if you can imagine, Prudhoe Bay, Alaska, where the sun disappeared last week and won’t reappear until January 18th.

The perfect gift of his lasting legacy

A break from the heat and protection from Ian

The chances of God’s grace in times of need