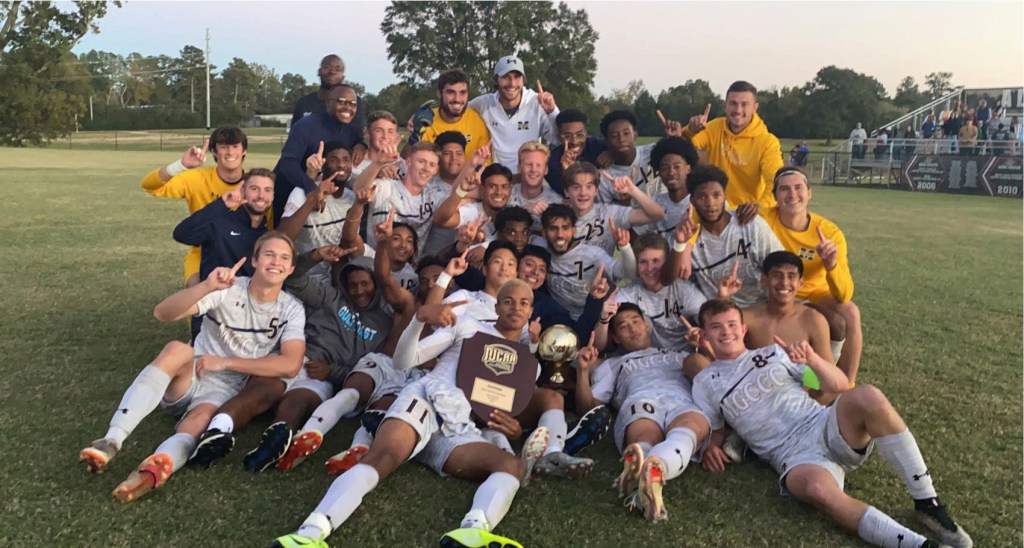 The Bulldogs did so against archrival Pearl River, which had beaten them in PKs two years ago in the same game. Keeper Zach Seymour (So., Gulfport/St. Patrick) saved the Wildcats’ eight attempt from the spot, and Fabien Barker (So., Madison/Madison Central) immediately buried his chance.

“It feels amazing, especially after my freshman year when we lost in PKs, it feels amazing to win it in PKs,” said Seymour, who even scored the Bulldogs sixth penalty attempt in the shootout. “Especially against Pearl River, too.”

The game officially counts as a 2-2 tie after double overtime, but the Bulldogs earned an automatic berth in the NJCAA Division II Men’s Soccer Championship which starts Nov. 15 in Wichita, Kansas. No. 3 Pearl River is likely to claim an at-large bid.

“We’ve lost so many that way, to win one that way feels really good, especially against that opponent,” Gulf Coast coach Chris Handy said. “They’re a really good team and they’re going to make noise in nationals. It just means a lot.”

Gulf Coast fell behind on a 22nd-minute goal by Riley Smith, and it stayed that way until halftime.

The Bulldogs amped up the pressure after the break, and Ashton Taylor (So., Olive Branch/Center Hill) scored after a long punt by Seymour. Taylor got on the end of it behind the PRCC defense and equalized.

The Wildcats made it 2-1 in the 76th minute on a goal by Harper Baggett, and it was another high-pressure situation for the Bulldogs.

Their increased intensity paid off with a corner three minutes before the end of regulation. The ball was pinged into the box and deflected around. It fell at the feet of Witwise Akyeano (Fr., Milton Keynes, England/St. Paul’s Catholic), who said he’s called the “Fox in the Box.”

“The cross came in, and my only thought was to put the ball in the net,” he said. “Nothing else. I saw that space open and I used my side foot. It had been a bit complicated during the game, and we just wanted to get the goal. The belief was there.”

Neither team scored in the final minutes of regulation, or the 20 minutes of overtime.

That set up a string of successful penalty attempts for both teams all the way through the seventh round. Seymour scored the sixth Bulldog attempt, and he had gotten a fingertip at least two other Wildcat attempts.

The eight wound up right in his gut.

Barker calmly stepped up as the final ounces of daylight trickled away in Ridgeland.

“We’ve been doing this since the beginning,” he said. “Every practice, about seven of us go to take PKs. It was just like practice. We were ready for it.”

That unleashed a tsunami of emotions. Bulldogs sprinted off the bench to mob Barker and Seymour. Former players vaulted the fence along the sidelines to join in the unhinged celebration.

Handy saluted all those people and more. It was the fifth appearance for his teams in the conference championship game, but their first win. Included in those four previous appearance were three times the Bulldogs had lost a penalty shootout.

“For me, it’s so much more than just this team,” he said. “It’s the coaching staffs, the players, it’s Jordan Hall, it’s Windham Whatley, it’s Mitchell Cecatiello. Those guys competed and had great seasons and fell short. I know all of them can feel it like I do. I’m more happy for those guys than I even am for myself.”