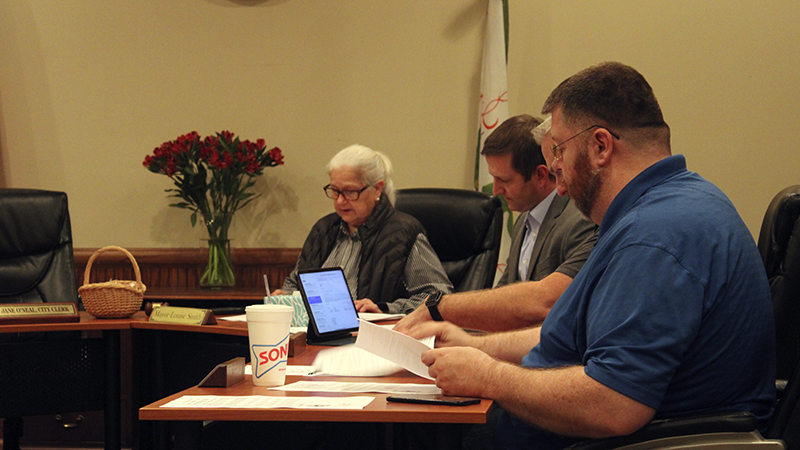 Poplarville’s Board of Aldermen approved a motion to create a new position in the water department and hired someone for that new position during a special call meeting held Thursday evening. To cover the additional costs of that new position, the Board is considering an increase to water rates. Photo by David Thornton Jr.

The Board of Alderman called a special meeting Wednesday afternoon to discuss the need to hire a new assistant general superintendent of Public Works and then considered a rate increase to help pay for the extra employee.

After a short discussion in open session, the Board moved to a long executive session. Eventually the Board decided to possibly hire Heath Smith as the Assistant General Superintendent of Public Works at a salary of $25 an hour effective January 3, 2022.

To fund the new position, the Board is considering an increase to water rates. Currently the city has there is an estimated 1,230 active accounts that would be affected by the proposed increase. The last rate increase in Poplarville was approved on Oct. 6, 2015.

During discussion of the matter, Aldermen Bobby Nestle suggested increasing residential and commercial base rates by $2 per thousand gallons.

“It’s the simplest way to raise it,” said Nestle.

The Board is still waiting to find out if ARPA funds can be used to offset the extra expense, and the Board has discussed applying for water and sewer grants to assist in city projects during previous meetings.

Additional discussion about the matter included the water department’s total revenue last year. During the last fiscal year, the total revenue in that department was $1.2 million and total expenditures were $1.1 million. The difference calculated to $84,430. Any sewer rates collected by the city are remitted to the Pearl River County Utility Authority.

Same Hale, the current Water Department Superintendent for is nearing retirement. It appears the city did not advertise the new position internally and instead chose to use an emergency motion to hire Heath Smith.

Alderwoman Anne Smith said, “We needed to find someone with the common knowledge as Sam Hale, we decided to make that change, it was an emergency situation that we needed to fill this position.”

The Board did not make a final decision on whether to raise water rates, but decided to take the matter under advisement until the Dec. 7, 2021 meeting where it will be discussed again.