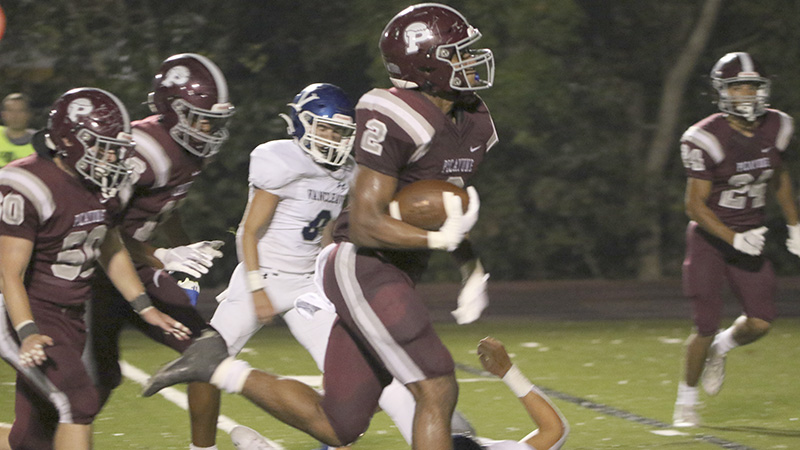 Pearl River Central High School’s Blue Devils fell short Friday night to the Vancleave Bulldogs in high scoring game 49-29, while Picayune’s Maroon Tide picked up a fifth win in a row on the season, beating the George County Rebels 59-33.
The Blue Devils never punted on offense keeping their drive as live as possible.
They rushed for 230 yards and passed for 130 yards for a total of 360 yards on the night.
The Bulldogs went for 82 yards passing and 202 yards running the ball.
Danyan Bilbo accounted for five of the Bulldogs’ seven touchdowns.
“I think we played hard, but I don’t think we played very intelligently, we made some very unwise decisions,” said Head Coach Jacob Owen.
“We couldn’t seem to stop them.
We gave them extra possessions because of turnovers that were 100 percent our fault,” said Owen. “We kind of gave the game away, just to be real.”
The Blue Devils move to (1-6) on the season and (1-4) in district play.
PRC will host the Gautier Gators on Oct. 29 at 7 p.m.
The Maroon Tide picked up the team’s fifth win in a row last Friday, securing another week in the first place spot for the 5A Region 4 District title.
“They (Rebels) were pretty good offensively, and we knew that going into the game, but our defense was able to get a few stops,” said Maroon Tide Head Coach Cody Stogner.
“We scored every time we got the ball, so our offense executed our game plan as well.”
The Maroon Tide ran for 550 yards on the night. Donta Dowdell had the bulk of the carries for the Maroon Tide, finishing the game with 240 yards. Chris Davis and Darnell Smith both ran for over 100 yards.
Next for the Maroon Tide (8-1) will be Long Beach. Picayune will host the Long Beach (1-7) this Friday, Oct. 29 at 7 p.m.