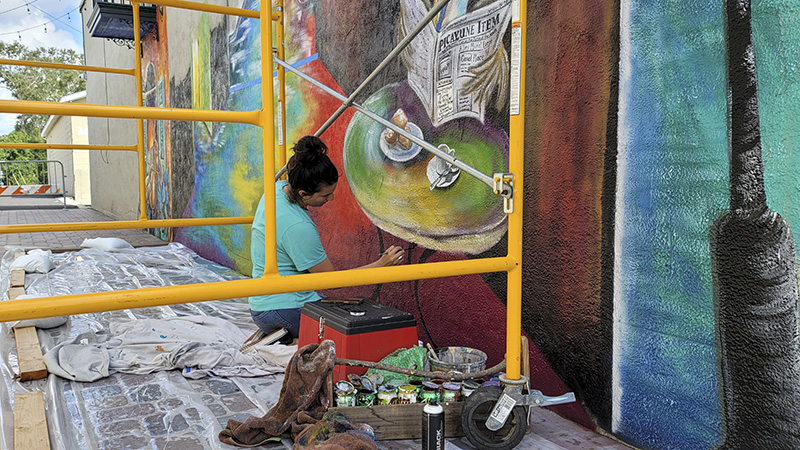 In this file photo, local artist Ashley Mason works on a mural in an alley along East Canal Street now called Canal Place. A second alley project is being worked up by Picayune Main Street Inc. Photo by Jeremy Pittari

Picayune Main Street will host a ribbon cutting for its first Creative Outdoor Spaces Project. The event will be held on Oct. 14, at 5:30 p.m., in the alley located at 121 East Canal St.

Picayune Main Street has received 16 private donations from residents, businesses and clubs in the Picayune community to make the project a reality.

As part of the project, the alleyway received a complete makeover, including brick pavement, light strings donated by Home Depot, and a mural by Picayune artist Ashley Mason that features a French Quarter theme. Dinning tables, benches, plants and flowers will be added to the ally.

“We turned this unused space… into this urban living room for everyone to able to use,” said city of Picayune Grants Administrator Christy Goss.

In one week the alleyway will be completely finished.

“It’s going to be an award winning project for sure,” said Goss.

A second phase of the project will include renovation of another alleyway across from the first. They will be breaking ground on that project n in October. The second ally is a lot longer than the first and will require more work. It’s estimated to be a $60,000 project. Goss hopes the expenses won’t be that costly but will work with whatever funding is on hand.

“We are a design on a dime kind of people,” said Goss.

The area will be called Canal Place.