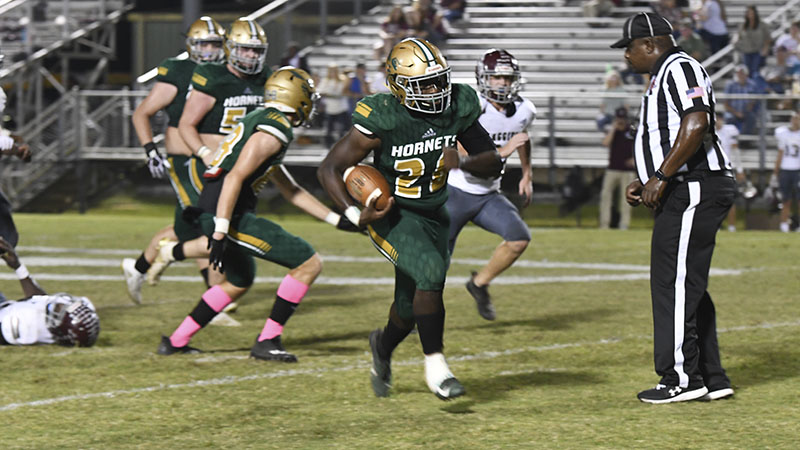 The Hornets scored their first touchdown of the night in six plays for 70 yards. Hornets Avan Jarvis finished off the drive with a 45-yard rush. The PAT was good by Zack Carpenter and the Hornets led 7-0, eight minutes left in the quarter.

The Hornets forced a fumble on the Aggies’ first possession recovering the ball in great field position on the Aggies’ nine-yard line. In two plays, DJ Richardbey picked up another touchdown for the Hornets, putting Poplarville’s lead at 14-0 with four minutes left in the first quarter.

Before heading to the halftime break the Hornets scored a fourth touchdown in four plays capped off by Maurice Travis for eight yards. Putting them in that scoring position was DJ Richardbey, who had a big run in the previous play for 37 yards on second and 13.

Hornets went into halftime with a 28-0 lead over the Aggies.

In the second half, the Hornets added another touchdown to an already dominant lead. With four minutes to play in the third quarter, the Hornets forced another Aggies fumble recovery with great field position. A six yard run up the middle by Avan Jarvis give the Hornets a 35-0 lead. The Hornets held off any attempt of a comeback by the Aggies as they walked off with a dominating 35-0 win completing a six game winning streak.

Head Coach Jay Beech kept it short and sweet about the night’s game, “I thought we did pretty good the first half and pretty terrible the second half,” he said.