Poplarville continues run to playoffs with win over Tornadoes 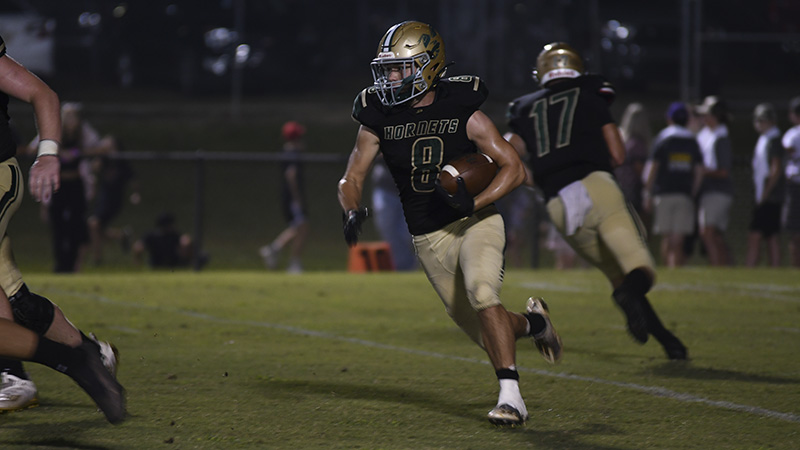 Tyron Holston runs hard for the Hornets during Poplarville’s big win over the Tornadoes. Photo by David Thornton Jr.

The Hornets came out strong in the first half of Friday’s game. On their first possession they covered 68-yards in six plays capped off with a completed pass from Matt Will to wide receiver Braxton Conerly for 31-yards. The PAT was good by Zack Carpenter and the Hornets led early in the game 7-0.

The Purvis Tornadoes’ following possession ended in a fumble recovered by the Hornets defense.

The Hornets begin their drive on the their 30-yard line. The Hornets offense only needed four plays to reach the end zone again. This time Khalid Moore scored the touchdown from 48-yards out.

Purvis came up empty again on its drive and had to punt back to the Hornets.

With 2 minutes left in the first quarter, the Hornets started on the 40-yard line. In three plays they added to their lead when Maurice Travis ran big for 59-yards to paydirt.

The next Hornets possession was at the 10-minute mark of the second quarter and in seven plays they continued to show their dominance through six first downs on the drive. On second and goal from the five, Avan Jarvis muscled his way to the end zone for a Hornets touchdown that put their lead at 28-0.

Before halftime, the Hornets added to their lead one more time in 8-plays and 79-yards. Maurice Travis ran it in for the Hornets from 5 yards out, putting the lead at34-0 with 1:30 before half time

The Tornadoes received the ball coming out of halftime, but that possession didn’t last long when a fumbled ball on fourth and long gave the Hornets control when Nakiel Trotter scooped up the ball and ran for 55 yards for a Hornets defensive touchdown. At the 9:30 mark of the third quarter the Hornets extended their lead to 42-0.

The Purvis Tornadoes kept themselves from a shut out when. Tornadoes running back Cummimgs Moses scored from 8-yards out.