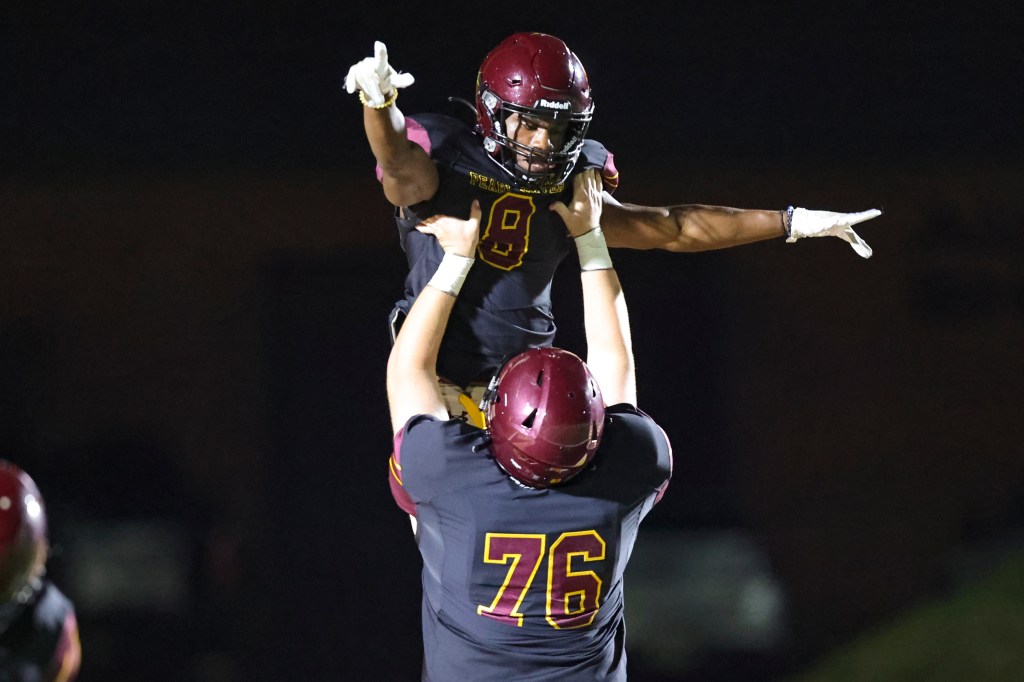 Then the fireworks began.

The victory marked the Wildcats’ most lopsided win since the Wildcats defeated Coahoma 59-10 in 2006. The win was also PRCC’s greatest offensive performance since defeating East Central 59-40 in 2017.

“We feel like our team is good enough to beat anybody, but all year the problem has been us with turnovers,” said PRCC coach Seth Smith. “Coach Ty Trahan, TaRon Sims and Lorenzo Breland are as good as it gets when it comes to defense. We just had to help them.

“Tonight Coach David Chatham and the offense helped them. When you talk about a vision, this is the vision.”

Collectively, the Wildcats set a school record by rushing for 534 yards — blowing past the previous high of 457 set in 1993.

“That just shows how much everyone keeps working after everything that we’ve been through this season,” Brown said. “Even though we haven’t started off too great, we’ve continued to fight, and I love that about this team. We just need to continue to do the same thing.”

If the fireworks, which were provided by Highland Community Hospital and Pearl River County Hospital and Nursing Home, and the Homecoming court presentation were the openers, Brown and the Wildcat running backs were the headliners.

“That’s who Tony is,” Smith said. “You got to see who he is and what got him a division one scholarship. He’s phenomenal.”

Brown gave the Wildcats (2-4 overall) a jolt on their second play of the game, taking a handoff 56 yards down the HCC (0-6) sideline for the opening score.

Holmes responded on its very next play, but it was all Wildcats after that.

Will Young (Hurley; East Central) broke loose for a 46-yard gain during the Wildcats’ next drive and then capped the possession with a 1-yard QB-keeper to extend PRCC’s lead to 14-7 at the 10:44 mark of the first quarter.

“We switched up a lot of what we were doing up front. It helped a ton for us tonight,” said Young, who started the game at quarterback. “I’m really glad we did that because it opened up the holes. We lined up differently in some formations, so their defensive line didn’t know what to do on a lot of things.

“We’re just fortunate and give God the glory for that win and the ability to play football itself.”

Following a Holmes punt, PRCC went right back to work. This time, Brown broke free up the middle of the field for an 81-yard touchdown — the night’s longest play.

Brown also scored a 72-yard touchdown late in the first quarter and finished the first frame with 212 yards.

Young completed PRCC’s lone pass of the first half with 1:46 left in the second quarter for a 30-yard touchdown strike to Antonio Gayden (Harvey, La.; West Jefferson). The pass-and-catch was not only Young’s first career score through the air, but it was also Gayden’s first reception as a Wildcat. It also ended up being PRCC’s lone completion of the contest as the Wildcats’ QBs finished the contest 1-for-2 through the air; a third pass — a completion — was negated due to a holding call.

“I tell Coach Smith all the time to use me in whatever way that he needs. Anything that we need to do to win the football game,” Young said. “I played running back the first half of the season and now they moved me to quarterback. That’s what I played in high school so I felt very comfortable.

“The team played amazing. We did amazing up front.”

The Wildcats extended their lead to 41-7 midway through the third on a 4-yard run by Brown — his fourth and final score of the evening. The score was aided by a powerful 34-yard run across midfield by Milsap.

The former Oak Grove product finally found the end zone on the first play of the fourth quarter. Milsap cut to his right, found a hole and was gone for an 80-yard strike.

Qavonte Swanigan (Foxworth; West Marion) got in on the scoring with 5:08 remaining when he found a lane in the middle of the field for a 22-yard score.

“The offensive line was great,” Brown said. “As soon as I made it through the line each time and saw some green grass, I had to take it. Seeing these guys open a hole like that, you’ve just got to love it.

“You can’t have any complaints. They made the holes big enough that no one could touch me. I stayed dry the whole first quarter.”

LEADING THE WAY
Milsap finished second on the team in rushing with 167 yards on 10 carries. Young rushed for 70 yards on nine carries.

“I’ve said this and I’ve meant this: (The slow start) has been my fault,” Smith said. “This is the kind of football, it may be boring, but we’ve had success with it. I’ve done a bad job of relying on the little bit of football that I know and tonight was reflective of what our kids are capable of doing when they know what to do.

MISSISSIPPI SECRETARY OF STATE
Prior to the game, Mississippi Secretary of State Michael Watson joined the Wildcats for their Homecoming festivities. Watson, joined by his daughters Gracie Pierce, Annie and Cora Beth, served as the Homecoming parade’s grand marshal and then was the honorary captain for the coin toss. Watson is traveling the state to help increase voter registration.

NEXT UP
The Wildcats are back at home next Thursday for the annual “Cat Fight” against Jones College. Kickoff at Dobie Holden Stadium is at 7 p.m. Fans are encouraged to buy tickets in advance at PRCCAthletics.com/tickets. General admission tickets are $8 in advance online and $10 on game day.