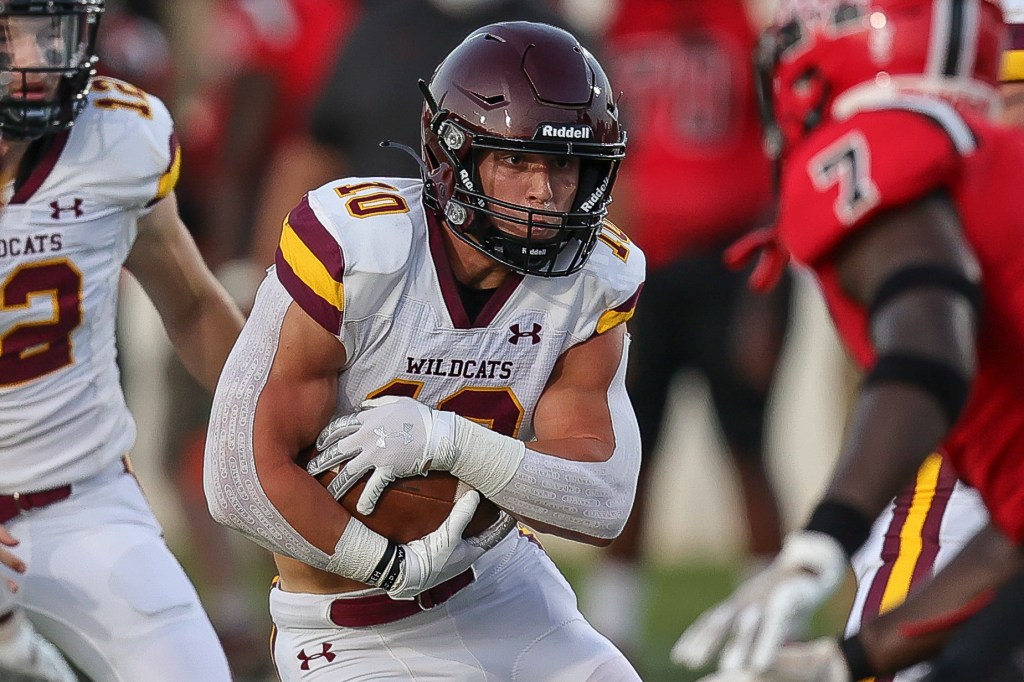 DECATUR, Miss. — The Pearl River Wildcats fought until the final buzzer but couldn’t come away from Bailey Stadium with a victory on Thursday night, falling at East Central 17-14.

“Their fight is awesome. We’re going to get this thing fixed,” Pearl River coach Seth Smith said. “Our defense is good enough. We can beat anybody. But we are so bad offensively and that’s on me. That’s my fault. The kids are trying. We just have to do a better job of putting them in position.

“This is a process. The thing I love is their fight. I can live with that. Our kids are doing everything we’re asking of them.”

FIRST HALF
Both defenses set the tone early in the game, forcing four straight three-and-outs. With ECCC (2-3 overall; 2-1 MACCC South) facing a second-and-15 at its own 30, Elijah Jenkins (Picayune) came around the right side of the line untouched for a big sack. Two plays later the Warriors punted it away.

PRCC quarterback Dustin Allison (Pass Christian) connected with Tavion Smith (Hattiesburg; Oak Grove) and Latreal Jones (Taylorsville) for 13- and 15-yard gains but PRCC (1-4; 0-3) turned the ball over once it crossed the 50.

The Wildcat defense came up big on the next possession as Michael Caraway Jr. (Bassfield; Jefferson Davis County) hijacked a pass for his first interception in maroon and gold.

PRCC took advantage of the short field. Following a 28-yard pass-and-catch down the ECCC sideline from Allison to Smith, Will Young (Hurley; East Central) powered the ball into the end zone for a 1-yard score and 7-0 advantage with 1:30 left in the first.

SECOND HALF
The defensive gameplay carried over into the second half. PRCC forced a three-and-out on the first drive of the third quarter. The Wildcats then pieced together an eight-play drive into ECCC territory — aided by a recovered muffed punt by the Warriors — only to see a 38-yard field goal attempt blocked.

PRCC returned the favor on the very next ECCC possession. The Warriors marched down the field down to the PRCC 23 but Justin Jefferson (Memphis, Tenn.; Bartlett) broke through the protection and blocked a 39-yard field goal attempt.

After both teams traded punts the Wildcats looked as if they had gained some momentum. PRCC pieced together a 10-play, 55-yard drive that milked 4 minutes, 30 seconds off the clock. Highlighted by a 25-yard run around the left side by Tony Brown (Hurley; East Central), Young took a QB keeper 1-yard into the end zone for the game-tying 14-14 score with 7:30 remaining.

Pearl River forced a three-and-out on ECCC’s next possession but following a Wildcat punt the Warriors did just enough to work their way into field goal range. With 7 seconds remaining, ECCC converted a 45-yard field goal for the go-ahead score.

The Wildcats had enough time on the clock for one final play but were unable to work their way into the end zone.

NEXT UP
The Wildcats return home next Thursday for Homecoming against Holmes. Kickoff at Dobie Holden Stadium is at 7 p.m. Fans are encouraged to buy tickets in advance at PRCCAthletics.com/tickets. General admission tickets are $8 in advance online and $10 on game day.