October often the driest month of the year 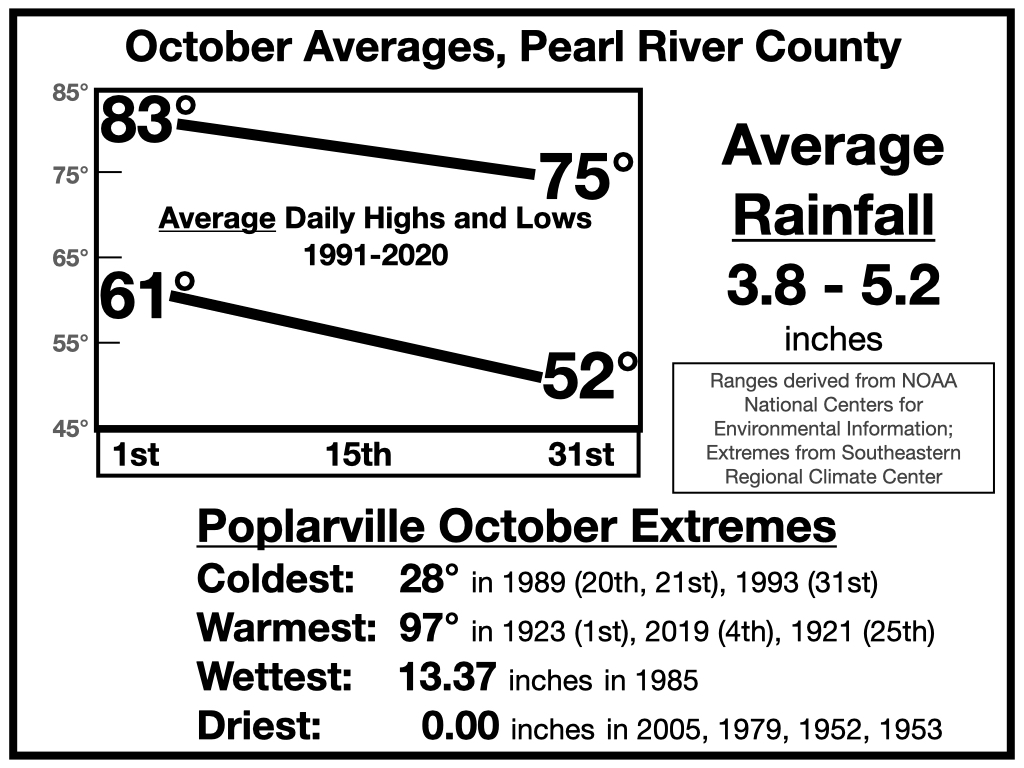 October usually brings some of the finest weather of the year to south Mississippi. Averages of historical data, sometimes called climatological “normal” highs, lows, and rainfall, give a good indication of why many people consider October to be their favorite month of the year.

Temperatures are much more variable in October than during the summertime, but are not prone to the wild swings that usually begin sometime in November and often continue through much of March. Based on the last 30 years, the average high temperature on October 1st across Pearl River County is in the lower to middle 80s. The average low temperature at the start of the month is in the low 60s.

By the end of the month, those daily averages have dropped considerably. The average low on Halloween morning is in the low 50s, and the average high on Halloween afternoon is in the middle 70s.

Although the average date of our first frost is in November, temperatures of 36 degrees or lower, which is the approximate threshold for producing frost, can occur in October. Based on the past 100 years of data, there’s about a 10 percent chance of having frost in October in the southern end of the county and about a 25 percent chance in the northern parts of the county. Those percentages are slightly lower for the past 30 years, as the first frosts have tended to occur later in more recent years.

Even freezing temperatures have been observed in October at the Poplarville Experiment Station seven out of 100 or so years of records. The earliest freeze ever recorded there occurred on October 20, 1989.

October and November are usually the driest months of the year in Pearl River County, both in terms of total rainfall and number of hours with rain. The average October total rainfall using data from the past 70 years is a little under four inches. However, the last 30 years has trended wetter with the October averages across the county in the four to five inch range.

In four Octobers since 1952, no rain was recorded at the Poplarville Experiment Station. However, rainfall is highly variable, even in what is typically our driest month. In October 1985, 10 to 14 inches fell across the county. Five to seven inches occurred over four days at the end of that month courtesy of Hurricane Juan as it meandered erratically off the coast of Louisiana.

Thankfully, no tropical systems are on the horizon for the coming week. It looks like there will be numerous showers between now and Tuesday as a weak cool front approaches. Once the front passes, rain chances, humidity, and night time temperatures should all decrease to near normal for Tuesday through Friday.

Keep on keeping on and don’t give up on dreams

Ian and Charley, a tale of two hurricanes