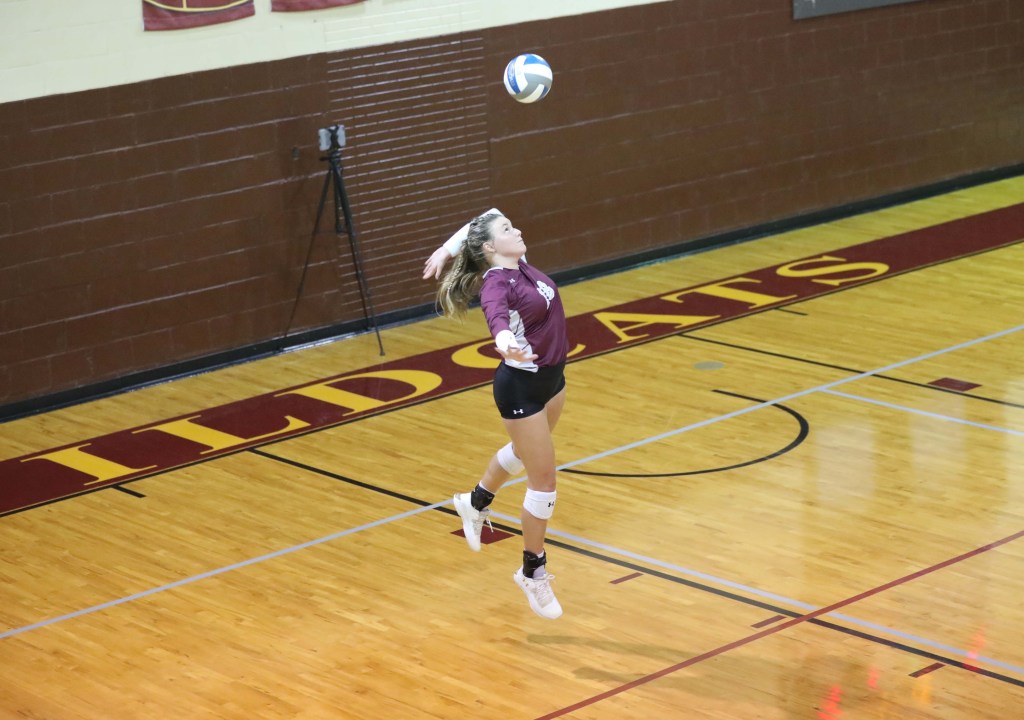 POPLARVILLE, Miss — The No. 19 Pearl River volleyball team claimed yet another win in straight sets on Tuesday, defeating Pensacola Christian 3-0 (25-12, 25-14, 25-14).
Tonight was the second meeting between the Wildcats and Eagles this season with Pearl River sweeping both matches.“This is the first match I have seen them play at their top level against a team we have previously beaten,” head coach Haley Chatham said. “We’ve talked about that all season – respecting every opponent and playing them as hard and as fast as possible.
“It isn’t an easy thing to do, but tonight they met and exceeded that goal.”
SET ONE
Pearl River (22-3 overall) scored early and often by taking 10 of the first 12 points, three of which came from kills by Diamond Jones (Gonzales, La.; East Ascension), Leah Draine (Mobile, Ala.; Mattie T. Blount), and Avery Beth Durdin(Olive Branch; Lewisburg). The run made the score 10-2.
Pensacola Christian (9-13) did not shy away eventually bringing things back to within four points at 10-6. From there Pearl River started to pour it on with Jones, Draine, and Durdin pitching in with more kills as well as a service run through Durdin. The Wildcats eventually saw themselves leading by as much as 11 at a score of 22-11.
Pearl River went on to take the set 25-12 through back-to-back service aces by Julianah Overstreet (Vancleave).
SET TWO
Pearl River hit the ground running in set two, claiming the first five points of the set by way of two Jones kills and an Overstreet ace. After the Eagles grabbed a point, Pearl River continued to pour it on through a service run by Allison Carpenter (Ocean Springs) along with kills by Draine and Payton McKerchie (Vancleave), pushing the score to 10-1.
From there, Pearl River claimed all the momentum and ran away with the set. The Wildcats withstood a late push by Pensacola Christian and won the set 25-14.
SET THREE
Set three opened with a kill from Hannah Burks (Ocean Springs; Vancleave).
From there, the teams traded blows making the score 4-3. A small service run through Annah Marshall (Lake Cormorant) then gave Pearl River the spark it needed forcing an Eagle timeout.
After the timeout, Pensacola Christian claimed a point, but a well-timed kill from McKerchie swung the momentum in favor of the Wildcats.
Pearl River never looked back, getting kills and service aces from a host of Wildcats, eventually taking the set 25-14 and the match 3-0.
LEADING THE CHARGE
Jones had a night to remember offensively for Pear River, grabbing 12 kills putting her over 300 for the season for the second year in a row. She also pitched in with a few blocks and a service ace.
“Diamond was lights out tonight,” Chatham said. “As impossible as it seems, she finds a way to get better every single match.”
After the match, Chatham mentioned that tonight meant a little more to McKerchie.
“Payton tore her ACL on this very day a year ago, in the very same gym, against the very same team,” she said. “There were some nerves involved tonight, but she chose to get on the court and be fearless.”
McKerchie pitched with seven kills for the Wildcats.
Pearl River had sizable service runs through Amy Wright (Palm Bay, Fla; Melbourne Central Catholic), Carpenter, and Durdin, including three aces from Wright and five from Carpenter.
“Amy, Allison, and Avery Beth were tough behind the service line tonight,” Chatham said. “They’ve entered themselves into a little competition with each other, and I love it.”
UP NEXT
The Wildcats return to action this Thursday against Bishop State. The match at Shivers Gymnasium is set to get underway at 5 p.m. and will be livestreamed at PRCCMedia.com/gold.
For the latest on Pearl River Community College athletics, follow us on Twitter (@PRCCAthletics) and Facebook (PRCCAthletics).