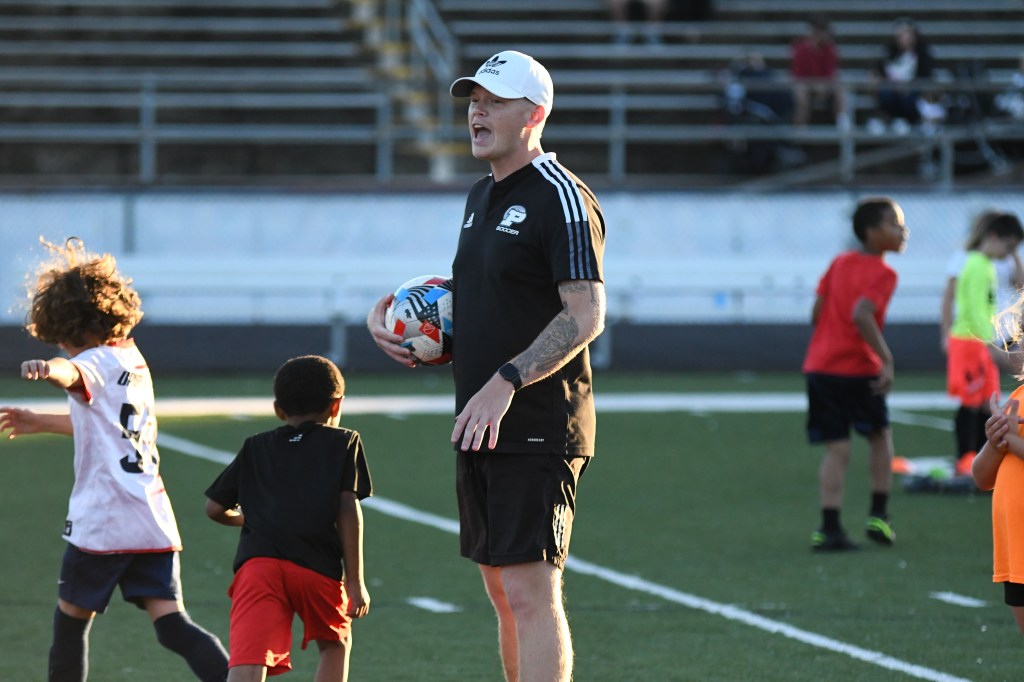 Picayune’s boys soccer team held a kids soccer camp on Saturday, for those aged 3-13. Boys Head Soccer Coach Brandon Butler hosts the camp once a quarter in an effort to provide a true coaching experience to the community.
Butler said that he and his athletes taught the young participants basic soccer skills to get them used to having a ball at their feet. The children went through drills and small games that incorporated basic soccer skills, most of which were taught by the players.
“Having these kids here is helping build our program,” said Butler.
Butler’s goal for his program is to have soccer reach a level of popularity of football and baseball locally. These camps help introduce soccer to the children and hopefully pique their interest in the game.
“If you can give back to the community and program, then they’re setting up the program for success in the future.”
Picayune Memorial High School is scheduled to hold a Meet the Tide event on Oct. 28 where members of the varsity and junior varsity soccer programs will be introduced.
That day, the boys and girls soccer teams will combine into two coed teams and play a Maroon vs. White game.
The event is a great opportunity for the community and fans to get a peak at Maroon Tide soccer.
“They’re going to able to showcase their talents and everyone is going to get to play,” said Butler.
Butler is excited about the team, the program’s upward trend.
“To me, it just can’t get there quick enough,” said Butler.
The Maroon Tide will have a full 26 player roster this season, with eight seniors three juniors and a number of freshmen and sophomores.
“A majority of my team is underclass men, we’re young but I think we’re good,” said Butler.
Mason Ripoll is one of the many freshmen on the Maroon Tide’s roster.
Ripoll is the junior varsity team’s captain and varsity striker who Butler gives high praise to for his competitiveness over the summer break.
This underclassmen roster is led by senior captain goalkeeper Will Walervis.
“Walervis is a true leader through and through,” said Butler.
Walervis and two more seniors, Alex Velasquez and Nick Walervis, are currently being scouted by multiple schools including Holmes Community College.
Over the summer, the Maroon Tide played two of the season’s six total matches against Pass Christian, and on aggregate the Maroon Tide won both matches by a score of 9-2.
The Maroon Tide was short handed over the summer, since most of the seniors on the team worked summer jobs and couldn’t play in summer tournaments.
“To me that was a really good showing for these guys,” said Butler.
“There are a lot of teams that I don’t think we’ll have a lot of issue with this season.”
Butler sees a lot of potential for his team to make a deep run into the playoffs this season. The players know their standards, and the goal they’ve set for themselves, which is winning a state championship, setting a legacy and coming back and doing it again next year.
When his players give 100 percent, Butler believes there’s not one team in their district and the state who can beat them.
“I truly believe that,” said Butler.
The Maroon Tide will start this season on Oct. 23, as face Hancock High School and Poplarville High School in a tournament.