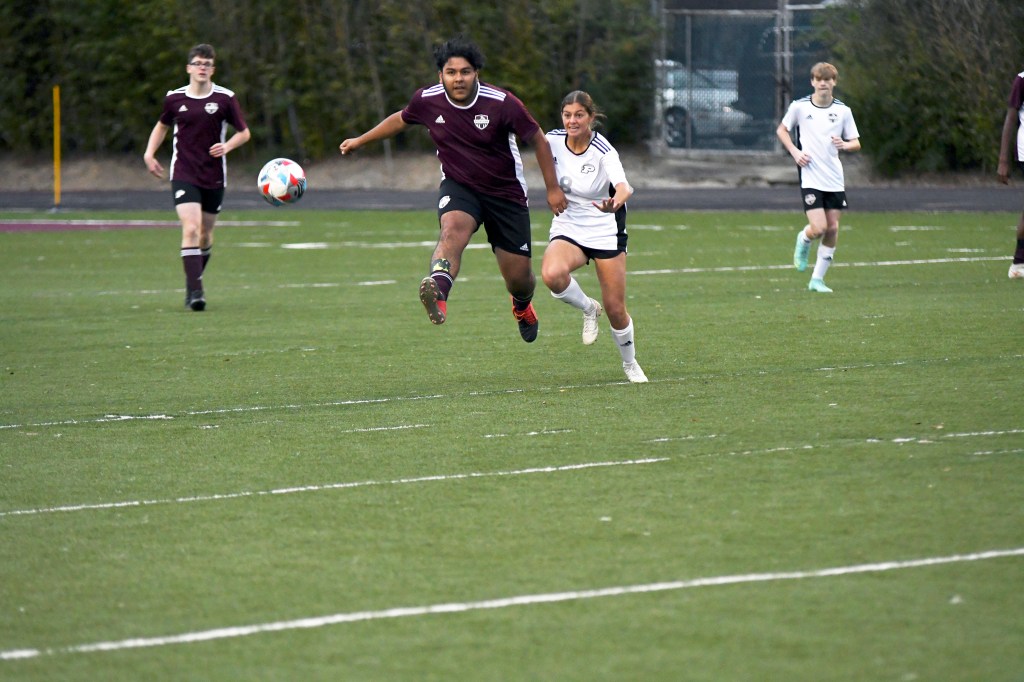 The Picayune Maroon Tide’s girls and boys varsity soccer team divided into two coed teams Thursday night for the Meet the Tide’s maroon and white scrimmage.
Meet the Tide was held Thursday afternoon at Lee-Triplett Stadium. The Picayune Junior High School soccer team was announced at the event along with Head Coach Devin Harrington. Players for the girls and boys varsity teams were announced along with girls Head Coach Edison Williams and boys Head Coach Brandon Butler.
The event brought in a large turn out from fans, parents and students who were eager to get a first hand look at this year’s soccer program.
“We were definitely just looking for ways to bring all programs together and give fans and parents the chance to see players from the other teams that they often don’t get see play due to the different game times,” said boys Head Coach Brandon Butler.
During the scrimmage a couple of players voiced their excitement and individual goals for this upcoming season.
For the boy’s program, freshmen forward Mason Ripoll said he is excited for the season to start, and he has high expectations for his performance this season.
“I think I can score 10 goals this year,” said Ripoll.
Ripoll is looking forward to playing every team on this season’s schedule but the matchup against Pearl River Central on senior night is the game he’s looking forward to the most.
Maroon Tide fans will be seeing junior defender Carter Edwards on both sides of the field this season. Edwards has been playing soccer for “too long,” he said. He intends to get back to the basics of soccer and perfect his craft.
For the team’s goals this season Edwards says,
“I think we’ve been doing really good, communication is a really big thing that we’ve been stressing and overall positioning on the field, so if we get those down I’m 100 percent certain we can play our version of soccer.”
Edwards is excited about playing more games this year, the JV and varsity schedule is packed with more games and there aren’t as many gaps between those games.
“It felt like it was taking too long between games but now we can kind of mark our progress quicker,” said Edward.
Freshmen midfielder Breanna Boatner said her goals this season are to be more aggressive and get involved in more action on the field.
“As a team I want us to win and try our best,” said Boatner.
Sophomore center and outside back, Railey Dawsey wants to make a run for the state championship. Dawsey is a two sport athlete at Picayune; she’s also on the volleyball team. Once volleyball ended she couldn’t wait to be on the field.
“I’m so excited, I’ve been waiting a while for soccer season. I’ve been playing soccer all my life, it’s important to me and I’m very dedicated,” said Dawsey.
Next for the Maroon Tide soccer program, the boys team will play in the Laurel Tournament on Oct. 30 and face the North Jones Tigers. The girls will be at home and face the Bay Tigers on Nov. 2 at 5:30.