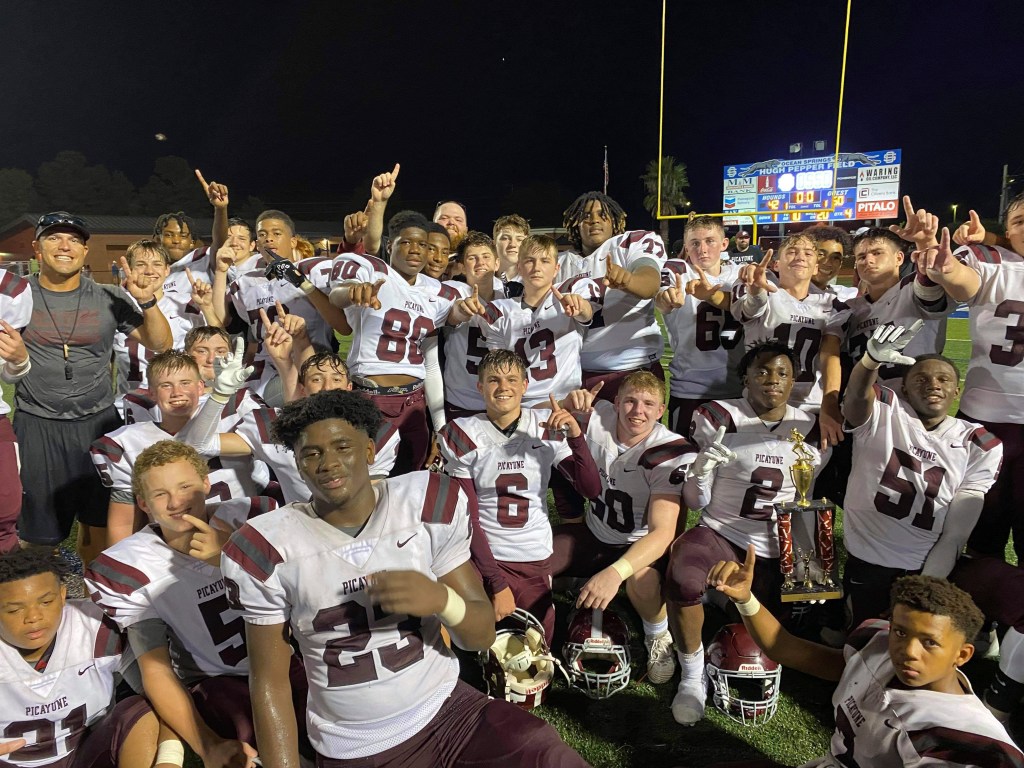 The Maroon Tide’s junior varsity football team won back-to-back championships after beating Ocean Springs High School Monday afternoon.
On Oct. 25 The Maroon Tide went head to head with the Ocean Springs Greyhounds for the title of Coast District Champions. Coming into Monday night’s game the Maroon Tide was unbeaten with a 7-0 record.
Maroon Tide’s Darrell Smith caught and scored the first of many touchdowns for his team Monday night.
“He’s our best football player on our team,” said 9th grade Head Coach Seth Hayden.
During Monday’s game, the Maroon Tide went for a two-point conversion early and succeeded. But the Greyhounds answered back to make it an 8-7 game. In the following possession, Smith ran his way to the end zone for a special teams touchdown.
When the scores reached 24-14, with the Maroon Tide on defense, Smith made a great defensive play by jumping a five-yard out route to intercept the Greyhounds’ pass and ran it home for a Picayune pick-six.
On the following Maroon Tide possession, Tristan Cooper rushed for a touchdown adding to Picayune’s score before heading into halftime.
“He’s another one of our really good football players,” said Hayden.
At the halftime break the Maroon Tide led 30-21.
“I was quite on the edge, it was a back and forth game, I’m trying to keep my cool, trying to keep the kids locked in and humble because these guys (Greyhounds) are good too,” said Hayden.
After the halftime break the Greyhounds got the ball and scored making it a two-point game at 30-28. The Maroon Tide answered back with Smith, as he broke away for a long touchdown and added another rushing score to his championship performance. The next Maroon Tide possession was concluded by Copper breaking out for his second rushing touchdown of the night. The Greyhounds answered back but time on the clock was too short for the Greyhounds to plan a comeback. The Maroon Tide went on to take home the title, beating the Greyhounds 50-42.
“I’m very excited in the way they played, they played hard, they gave everything they got and let it all out on the field, and that’s all you can ask for as a coach,” Hayden said.
Following the finish of the game, Hayden told his players just how proud he was of this year’s team.
“I told them how extremely proud I was of their hard work and dedication for their team and the program,” said Hayden.
The football program at Picayune has written in stone that they have expectation to win a championship at all levels.
“Anything short of that, I don’t want to say is a let down but that’s what we expect here at Picayune,” said Hayden.