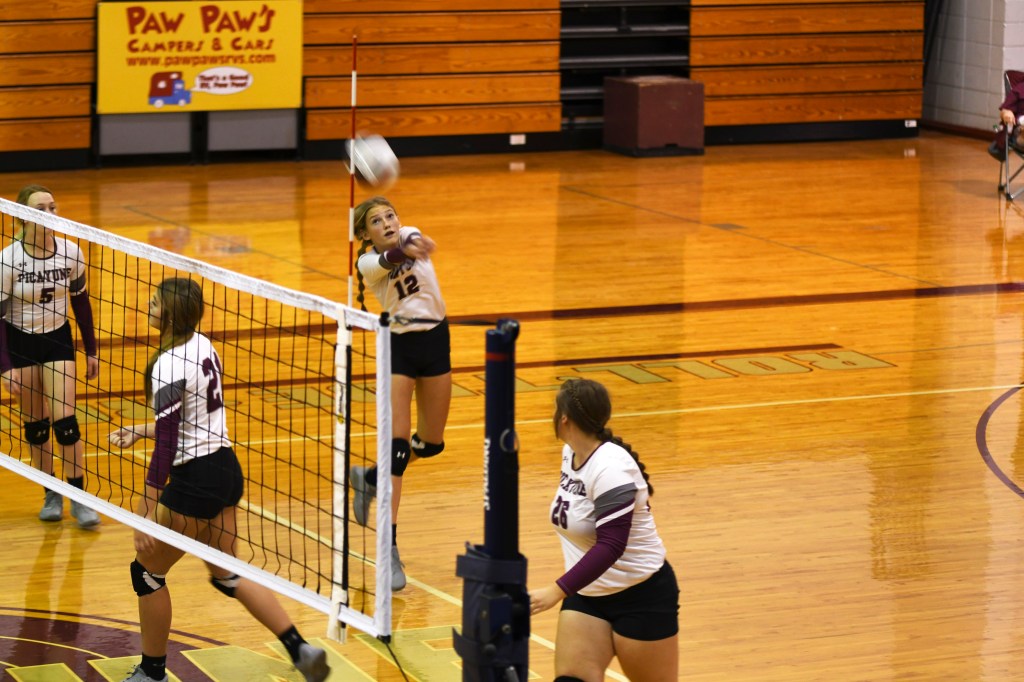 A rivalry match went down between the Maroon Tide and the Hornets on Oct, 7. It was also senior night for the Maroon Tide as Picayune honored the team’s four seniors, Sadie Howard, Ryan Sorrells, Grace Markert and Alexis Hansen before the game. This was the Maroon Tide’s last game, as they didn’t make it to this year’s playoffs.
During the senior night matchup, the Maroon Tide pulled off an intense comeback win in five sets against the Hornets. In set one, Poplarville gained an early 4-1 lead over Picayune. The Maroon Tide managed to dig themselves out of the rough start with a 6-5 lead, led by three aces from Picayune’s Hansen. The Maroon Tide scored one more point to add to that lead, forcing Poplarville Head Coach Rachel Landrum to call a time-out.
After the break, the Maroon Tide’s lead didn’t last long after the Hornets began to play with a lot more energy. They took a 17-10 lead over the Maroon Tide When the Hornets were up 19-12. The Maroon Tide followed up with their own run, closing in within one point to make it a 23-22 match. Serves from Amyiah Marks assisted Picayune in their run, but Poplarville held strong and scored the next two serves and closed out set 1 with a score of 25-22.
In set two, Picayune came out hitting hard and gained a 6-2 lead over the Hornets. The Hornets then went on a five score run led by Larkin Smith’s three aces.
With both teams tied at 8, Picayune went on another run and separated the score to 20-12. Poplarville did not sit back and give up, they went on a 6-1 run over Picayune, making it a three-point game at 21-18. Picayune Head Coach Courtney Dickens was forced to call a time-out to stop the Hornets’ run.
After the break, Picayune kept the lead while the Hornets stayed close, but Picayune stuck it out and won the second set 25-23.
In beginning of set 3, both teams didn’t allow big leads. Tied at 11 a piece, Poplarville’s Abbie Jordan had three aces in a row giving the Hornets a 14-11 lead. From there, Poplarville was in control and seemed to easily run away with a 25-16 win putting Poplarville up 2-1 in sets.
During set four, both teams were tied at 6 a piece after a huge block from Poplarville’s Caroline Phares. It reamined a close match until the teams tied again at 14-14.
Picayune took the lead through a combination of kills, blocks and aces, ultimately winning set four 25-16.
The final set was all Picayune. The Maroon started with a 4-0 lead capped off by a kill from Amyiah Marks. She also had a block giving her team a 6-1 lead.
Poplarville was a little slow to get into a rhythm but closed in on Picayune making it a 12-10 game. From there, Picayune took control and during the last play, Amyiah Marks had her second kill of the set giving the Maroon Tide a 15-11 win and a 3-2 victory over the Hornets.