Hornets go back to basics as playoffs approach 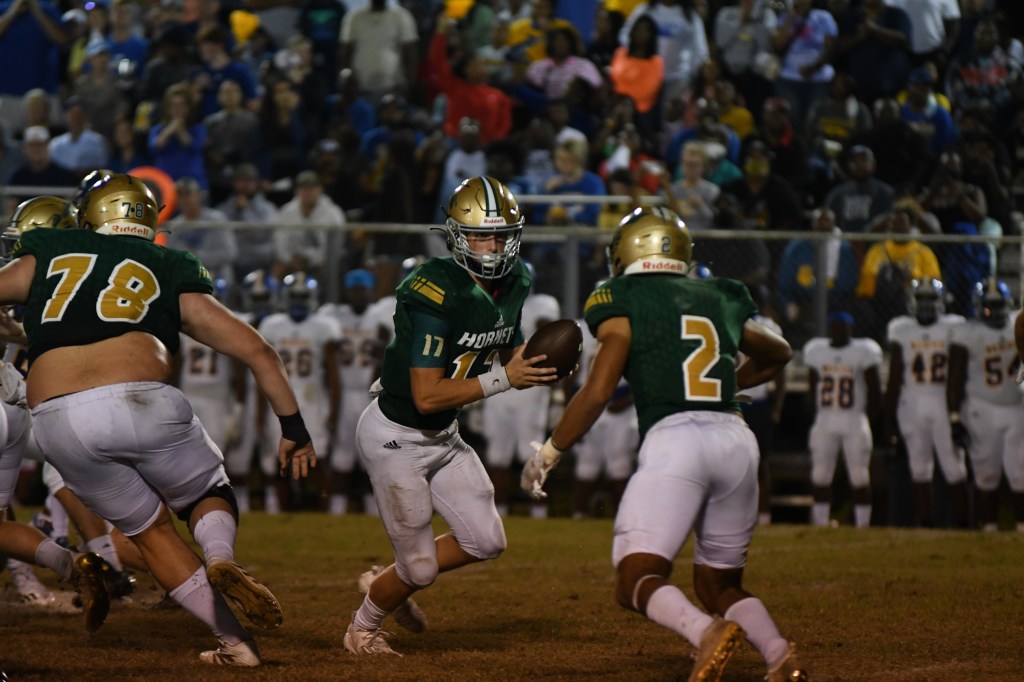 The Poplarville Hornets (7-2) regular season comes to a close this Friday when the team travels to play the Sumrall Bobcats (6-2). The winner of this matchup will secure the second place spot in the district standings.
“This will be a battle for district,” said Hornets Head Coach Jay Beech.
The Hornets will face a spread and wide field passing team in the Bobcats. According to Maxpreps, between the three Bobcat quarterbacks, they have attempted 223 passes for a total of 1,913 passing yards and 23 touchdowns.
“They’re going to test our defensive backs, for sure and a lot,” Beech said.
The Bobcats defense plays a 3-3-stack defense led by a middle linebacker who Beech says is the Bobcats best defensive player.
In order to bounce back from Friday’s loss to Columbia and regain some momentum before heading into playoffs, Beech looks to elevate the Hornets level of practice, work on not turning the ball over, improve ball security through drills and execute the fundamentals better. Ball security is a must for the Hornets. On the season Poplarville has fumbled 22 times, of which 13 resulted in a turnover.
“We just need to go back to the basics, make sure we’re ready to make a playoff run,” said Beech.
On the year the Hornets stand 3-1 in the 4A Region 7 District. This season, Hornets quarterbacks have thrown the ball 40 times for 249 yards and four touchdowns. Khalid Moore leads all receivers with eight catches for 172 yards and two touchdowns on the season. The ground game is where the bulk of the Hornets stats shine. As a team, Poplarville carried the ball 372 times for a total of 2,648 yards and 71 touchdowns. Six Hornets players hold 100 or more rushing yards. Maurice Travis leads all rushes with 95 carries for 773 and eight touchdowns.
The Hornets defense is standing strong; six players have 20 or more solo tackles on the season. Ahmad Harmon leads all Hornets tacklers with 53 solo tackles, 38 assisted tackles for 91 total tackles. Khalid Moore has nine sacks on the season averaging one sack per game. The Hornets have also picked off four passes on defense and caused 17 fumbles on the season.
The Hornets next game will be at Sumrall on Oct. 29. Kick off is at 7 p.m.