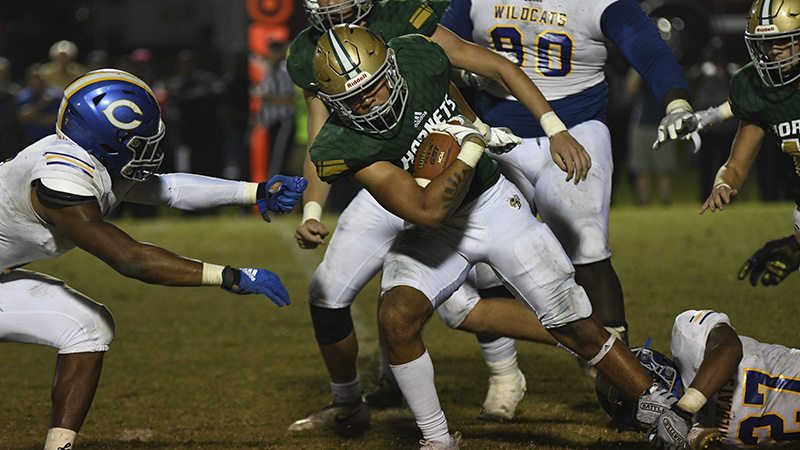 Maurice Travis pushes past Wildcat a tacklers for a Hornets first down.

The Poplarville Hornets dropped a district league game at home against the Columbia Wildcats 27-3.

The Poplarville Hornets used 8 plays that covered 45 yard for an early first quarter 3-0 lead over the Columbia Wildcats when Hornets’ kicker Zack Carpenter punted through the uprights for a 25-yard field goal.

After that, the Wildcats pushed down the field and completed an eight-play drive covering 80 yards that put the Wildcats up 6-3 with 10:30 left in the second quarter. The Wildcats PAT from Luke Stogner fell to the wide left.

The following possession The Hornets created good rhythm in the ground game but the drive came to an unsatisfying end when the Hornets Dj Richardbey fumbled the ball that the Wildcats recovered on their 35-yard line.

The Hornets soon paid for the turnover when the Wildcats drove 65 yards in 10 plays for another Wildcats’ touchdown. The Wildcats went for two and succeeded when Colin Haney passed to Dj Clyod, giving the Wildcats a 14-3 lead.

The Hornets received the ball after the halftime break  but on the first possession the Hornets fumbled while running the ball. The Wildcats recovered and add salt to the Hornets wound  when they scooped the fumble and ran it 70 yards for a Wildcats defensive touchdown. After the PAT the Hornets found the score at 21-3 with just 20 seconds into the third quarter.

With nine-minutes left in the fourth quarter the Hornets had possession, but fumbled for the fifth time of the night where the Wildcats recovered. Time the Wildcats defense ran 50-yards for their last touchdown of the night.

The Hornets fell to the Wildcats 27-3 and dropped to 7-2 on the season. The Hornets will conclude the regular season schedule on the road against the Sumrall Bobcats on Oct. 29 at 7 p.m.