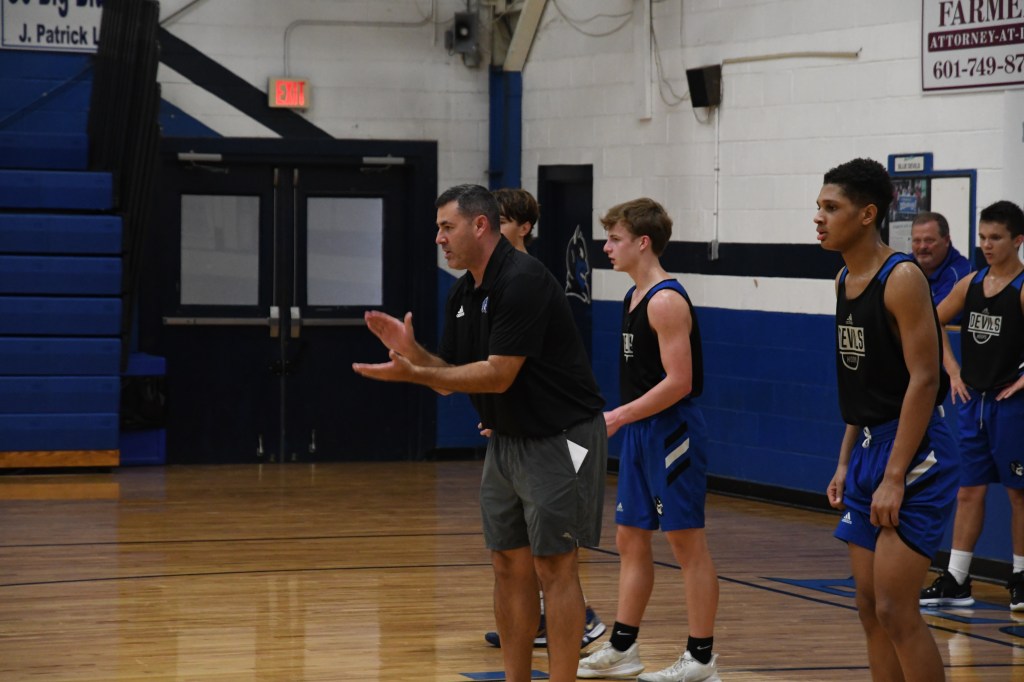 Head Coach Scott Stephens is entering his sixth year at Pearl River Central as the school’s varsity basketball coach, and continues to add a winning culture to the Blue Devils program.
The Blue Devils have only made three playoff appearances in the school’s history, two of which were during the years Stephens was coach. In 2017-18 and 2019-20 Stephens led the Blue Devils to the school’s first playoff appearance since the 1960’s. During those two seasons, the team had 19 or more wins during each season and the 2017-18 team won a district championship.
Before focusing on practices and games or recruiting fans to support the team, Stephens felt it was important to improve the program from the inside to start.
“We really tried to rebrand this place,” said Stephens.
To reach the goal of rebranding and updating the boys basketball program, Stephens added new hardwood floors to the gym. An updated logo for the team was put on the wall pads, gym floors, player chairs and the score table. Other additions include a brand new sound system, which was an upgrade from his first years at PRC.
“When I first came here what they had was a travesty,” said Stephens about the old sound system.
The Blue Devils want to be respected within the community and throughout the state as a great basketball program.
Most of the Blue Devils varsity team will be fairly new this season. Other than two-varsity returners who played limited minutes last season, the team will be full of last year’s junior varsity team. Over the summer, the Blue Devils played 28 games and scrimmages and they played well.
“The summer was big for us to play those games and get them acclimated with one another,” said Stephens.
Those games were valuable lessons since they helped Stephens and the team better understand the team’s strengths and weakness.
“What not to do, and what we can’t get away with,” said Stephens.
From a programs standpoint, Stephens expectations are nothing less than winning a district championship and to make a run in the playoffs, but individually each player has their role to contribute to the team. Every player’s goal and expectations for the year are different.
“All of them have brand new goals, and I got to plant the seed and water it to help them achieve their goal,” said Stephens.
The players have grown up knowing what that the standard is, and what Stephens wants to accomplish.
“It’s been engrained in them since they were in the seventh grade,” said Stephens.
“They’re ready to play an opponent, ready to screen and hit somebody else than their teammates.”
The next step for Stephens is piecing together the path to a district championship.