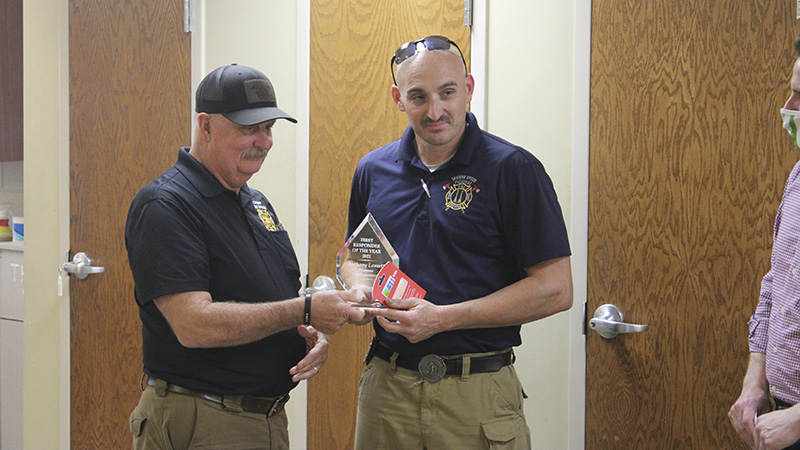 Picayune Fire Chief Pat Weaver and firefighter Anthony Lossett pose after Lossett was presented the award for First Responder of the Year for his efforts in saving a young boy’s life after the boy was involved in a vehicle collision. Photo by David Thornton Jr.

Tuesday afternoon, Picayune Firefighter Anthony Lossett was awarded the First Responder of the Year by Keesler Federal Credit Union for his commitment and protection of the citizens in Pearl River County.

The award was presented to him after he took it upon himself to help a person in need while off duty.

That incident took place one day when Lossett was driving home after teaching a class when he noticed a truck had left the road and come to rest in the woods about a mile away from his own home.

When Lossett stopped to provide assistance, a man approached and told him that a young boy was injured during the collision and was bleeding from his left leg.

Lossett immediately got out of his vehicle and approached boy to assess the boy’s injuries. To stop the bleeing, Lossett applied a tourniquet to the boy’s left leg.

The boy was later transported safely to an area hospital where surgeons at the hospital said Lossett’s quick use of the tourniquet saved the young boy’s life.

“Nobody does this for the awards, everyone does their job, pulls their weight, does what they can when they can. We always say, we didn’t create the situation, but we must create it better once we leave, whether it’s fires or medical, it’s what we do,” said Lossett.