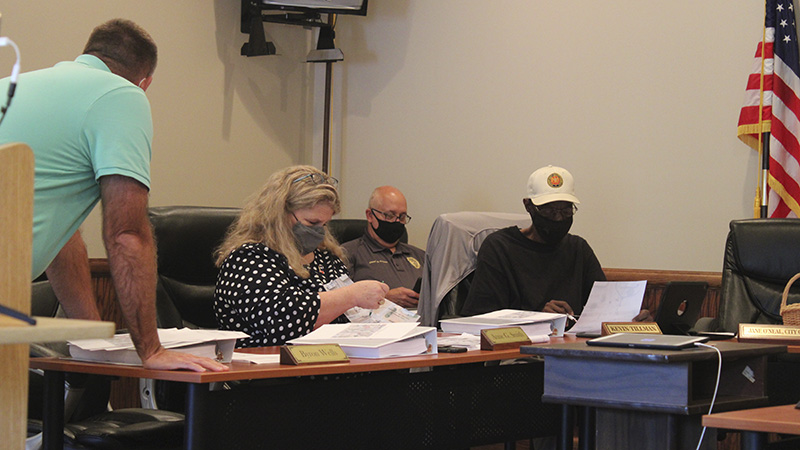 Poplarville Alderwoman Anne Gendusa Smith addresses the Board of Aldermen concerning an intersection at the entrance of PRCC that seems to have a lot of vehicle collisions. Photo by David Thornton Jr.

The Poplarville Board of Alderman met Tuesday to discuss areas of the city prone to vehicle collisions and the potential for another street repair project.

At the request of the Gulf Coast Center for Nonviolence the Board approved a motion to proclaim the month of October as Domestic Violence Awareness Month. Mayor Louise Smith read the proclamation before the Board during Tuesday’s meeting.

Also during the meeting, Alderwoman Anne Gendusa Smith asked the Board to discuss a trend of vehicle collisions occurring near the entrance of Pearl River Community College at the intersection of Highway 11 and Larkin Smith Drive. Smith said she has personally seen a number of traffic incidents and accidents occur in that area.

“There are many lanes that come together, it’s very difficult to navigate,” said Smith.

She adds that the lack of stop signs in the area cause drivers to cut each other off. One such incident involved Smith’s son being involved in an accident in that area. Anne Smith and Mayor Smith spoke to the Mississippi Department of Transportation about the situation, who informed them that representatives with MDOT will schedule a traffic study of that area.

“There are so many different lanes going every which way, you really got to pay attention,” said Police Chief Daniel Collier.

Smith said she would like the intersection to be safer. The Board will to look into placing stop signs in that area to see if they alleviate the problem. Currently, the Board is waiting to hear back from MDOT.

Public Works Superintendent Sam Hale provided the Board with an overview of recent work performed by his department. He said employees have picked up 118 loads of debris caused by Hurricane Ida totaling 1,652 cubic yards.

In other business, the Board approved a motion to cancel the 2021-22 cemetery maintenance contract for City Cemetery and Forest Lawn Cemetery.

The maintenance contract was held by Mr. Walter McGinty who owns McGinty Enterprise.

Jason Lamb with The Walker and Associates engineering firm and the Board discussed the need for street repairs. The Board estimates the city will have $64,788 in cash bonds, and should receive $254,724 in Internet sales tax proceeds to use to fund the project.

No decision was made on the matter since it’s still in the planning stages and the total amount of funding is still unknown.

“It’s an excellent opportunity for everybody to know it takes time for projects to mature and materialize, there is a fair amount of behind the scenes that occurs before we actually go to the street and start spending the big money,” said Lamb.

As of Tuesday, the Board plans to address issues along West North Street and North Jackson involving failed sidewalks and a box culvert.

A representative of the Poplarville Fire Department informed the Board that the city will be receiving documents regarding an interlocal agreement with the Pearl River County Board of Supervisors for fire protection in landlocked areas within the city.

The agreement will be further discussed during the next Board meeting.

The Board also approved a request from Poplarville Upper Elementary to conduct a “Grandparent’s Day Choral Performance” on Nov. 19, from 9 a.m. to 2 p.m. at the Town Green on Main Street.

— Reviewed the March 17, 2020 emergency declaration in response to the pandemic and approved a motion to extend it until the next meeting.