Rohrbacker pleas not guilty to murder of Lt. Michael Boutte 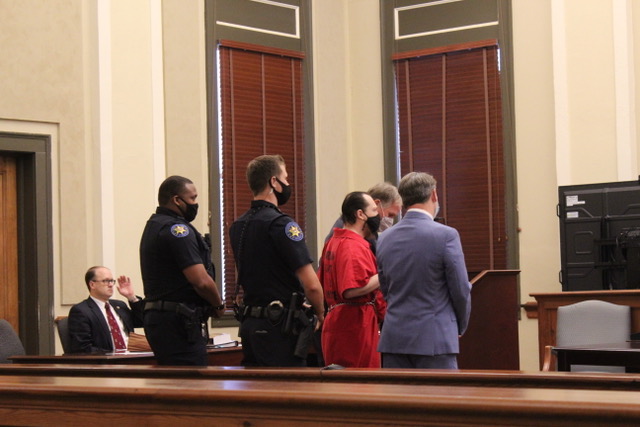 Joseph Rohrbacker, shown in a red jumpsuit, entered not guilty pleas during court proceedings held in Hancock County on Tuesday in relation to a Feb. 1 incident where he shot and killed Hancock County Deputy Michael Boutte. Submitted photo by Geoff Belcher

Rohrbacker, 31, entered his pleas before Judge Lisa P. Dodson in Hancock Circuit Court on Tuesday morning after Assistant District Attorney Chris Daniel read the charges one by one.

According to Count One, Daniel said, Rohrbacker is accused of “feloniously and without the authority of law killing and mudering Michael Boutte, who was employed as a law enforcement officer with the Hancock County Sheriff’s Office.”

Dodson accepted a motion from Rohrbacker’s attorney Frank P. Wittmann to have a psychiatric evaluation performed on the defendant.

Dodson also informed Rohrbacker that Wittmann may not be able to continue as his attorney, since he has taken a job as the Harrison County public defender, but said it hasn’t yet been officially determined.

Dodson set the first non-evidentiary hearing in the case for May 12, 2022, with follow-up hearings on June 17 and July 20, and an anticipated trial date of Aug. 15.

“Now that you’ve been indicted,” Dodson told the defendant, “they’ll do discovery and you can begin getting prepared.”

Rohrbacker has also been charged with three counts of contributing to the delinquency of a minor and one count of aggravated animal cruelty.

In a preliminary hearing in March before Hancock Court Judge Trent Favre on the capital murder charge, Master Sgt. Jason Gazzo, the leader of the Mississippi Bureau of Investigation’s probe into the case, testified that on the day of the shooting, Boutte and Deputy Braxton Manuel were called to the scene as a “welfare concern” after Rohrbacker allegedly made “suicidal threats.”

“To the best of my knowledge, the defendant … had become verbally combative with friends and family and started making suicidal threats toward himself and … sliced the family dog’s throat,” Gazzo said.

Boutte and Braxton first stopped at Rohrbacker’s brother’s home a short distance away to get more information before proceeding to the scene, Gazzo said.

Boutte reached the scene first, he said, and “When Boutte pulled into the yard, he was immediately met by gunfire from the defendant.”

When Manuel arrived on the scene, Gazzo said, “The defendant fired a shot at deputy Manuel, striking his patrol vehicle.”

The defendant then allegedly fired a shot at a neighbor who was walking by, allowing Manuel a moment to get out of his car and grab his rifle.

Manuel ordered Rohrbacker to put down his weapon, but the defendant then pointed it back at the deputy.

Manuel was then able to approach Rohrbacker and kick the shotgun away, Gazzo said. However, Manuel still had to use a Taser on the the defendant to get him under control, Gazzo said.

Both Boutte and Rohrbacker were airlifted to a Louisiana hospital, where Boutte was pronounced dead.

Gazzo said Rohrbacker “stated he had attempted suicide by cop and he admitted to randomly shooting at the deputy,” but insisted that he hadn’t intended to actually kill Boutte.

In the hearing before Moran, officers testified that the Feb. 1 incident that led to the shooting began when Rohrbacker was informed he had been reported to Mississippi Child Protective Services for allegedly molesting a teenage girl. That reportedly “enraged” Rohrbacker, setting off the day’s events.

Rohrbacker’s family members have said he suffers from schizophrenia and bipolar disorder.

Since then, he has been held in custody at the Harrison County Adult Detention Center, where he is being held without bond.

If convicted in the capital murder case, Rohrbacker could face either life in prison or the death penalty.