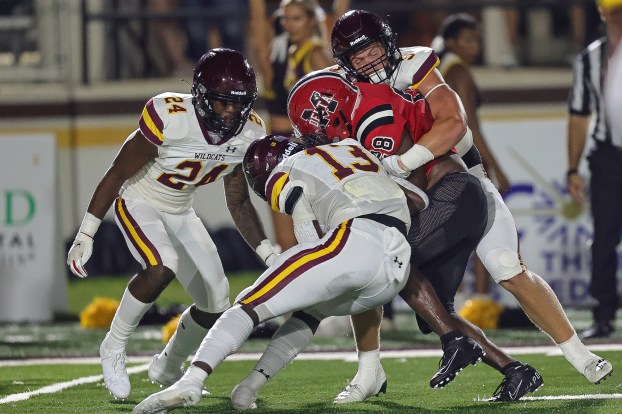 Three PRCC defenders close in on Coahoma running back and make a group tackle to end the run. Photo submitted

CLARKSDALE, Miss. — The Pearl River football team showed what it’s capable of after being knocked down Thursday. A week after a disappointing 2021 debut, Coach Seth Smith’s Wildcats responded in a big way, smothering host Coahoma to the tune of a 24-14 victory at James E. Miller Stadium.

With the win, PRCC improved to 20-1 all time against CCC.

“Last Thursday was a reminder that they hired me to do the same job here as we did at East Central, Pearl River Central and every other school. I’m treating these kids just like any of my other kids. I’m going to coach my backend off until I die or retire here,” Smith said. “Credit our coaches. They had a great plan and coached them up all week. They did it. They just did what we ask. As a coach, you ask them to do something and they did it.

“I’m just really proud of them and thank God I get to coach them.”

Thursday’s performance, Smith said, was a return to basics in some ways.

“It’s not a complicated game. If you can just simplify it and make sure they know what to do, then they can just use their God given ability,” he said. “Sometimes you can overcoach a little bit, which I have, so we simplified some stuff and just let them play.

“Tonight was a reflection of that.”

Defense dominated the first half of Thursday’s contest.

PRCC (1-1 overall) forced CCC to punt on its first possession after returner Jaylen Glaude (Ocean Springs) broke free on third down to get his hand on the Tiger quarterback’s pass.

Jamarius Lewis (Atmore, Ala.; Escambia County) jumped on a loose ball on CCC’s next possession. After PRCC punted the ball away they got it right back. Noah Mitchell (Leakesville; Greene County) tipped a pass and Jaydon Slater (Ridgeland) laid out to snatch the ball before it hit the turf.

PRCC capitalized on its second straight turnover, marching down the field. PRCC took a 7-0 lead with 3:00 remaining in the first quarter when Dustin Allison (Pass Christian) found Jordan Foushee (Bay St. Louis; Hancock) in single coverage in the right side of the end zone.

The Wildcat defense continued to swarm the Tigers (1-1) for the remainder of the half, forcing five straight CCC punts to take a 7-0 lead into halftime.

Pearl River turned defense into offense in the second half to build a double-digit lead over the Tigers. After PRCC capped its first drive of the third quarter with an Owens 25-yard field goal the defense got in on the action. PRCC forced CCC to punt, but a trio of Wildcats led by Micah Cherry (Petal) broke in on the Tiger punter and knocked the ball loose. Bryan Whitehead II (Bartlett, Tenn.) scooped up the ball and rumbled 55 yards down the CCC sideline for a touchdown. Owens’ PAT pushed PRCC’s lead to 17-0 early in the second half.

Coahoma got on the scoreboard at the 3:40 mark of the third quarter and attempted a two-point conversion but Zach Jones (Hurley; East Central) bull rushed the CCC protection and blew up the Tigers’ QB to thwart the attempt.

A mere seven seconds into the fourth quarter Marcus Thomas II (Nettleton) picked up PRCC’s second interception of the evening. Glaude tipped a pass and Thomas picked off the ball, racing 40 yards down the sideline before being brought down. Bryce Wallace (Pulaski, Tenn.; Giles County) capped the sequence two plays later, scoring on a 6-yard keeper around the left side.

Coahoma pulled within 10 mid-way through the fourth quarter and tried to make the game a one-score contest in the final minute, but once again PRCC’s defense answered the call and put the clamps on CCC.

Davontez Lynn (Farmhaven; Velma Jackson) and Chancellor Handy (Mobile, Ala.; Saraland) combined to sack CCC’s QB on the penultimate play of the game before Jaquez Andrews (Hattiesburg) and Slater brought the scrambling Tiger down on the very next play to secure the victory.

“They played like they’re supposed to play tonight,” Pearl River defensive coordinator Ty Trahan said. “It was real disappointing last week. All we do is try to get the best out of them and we didn’t do it last week. I’m just so proud of them for the effort they gave.

“If we keep doing that, good things will happen at Pearl River.”

The Wildcats rushed for 194 yards as a team, led by Wallace’s 62-yard effort. Nick Milsap (Oak Grove) and Allison rounded out PRCC’s rushing leaders with 57 and 44 yards respectively.

Allison and Wallace combined to complete 8 of 13 passes for 55 yards.

Justin Jefferson (Bartlett, Tenn.) was all over the field on defense, finishing with a team-high 11 tackles. Luther Woullard II (Petal) was second on the team with eight.

The Wildcats return to the gridiron next Thursday for a short trek across the county line to visit rival Gulf Coast. Kickoff in Perkinston is set for 7 p.m. PRCC returns to Dobie Holden Stadium Sept. 23 to host Copiah-Lincoln for a 7 p.m. start. Tickets for the Co-Lin game are available at PRCCAthletics.com/tickets.

All Wildcat games are streamed for free at PRCCMedia.com/gold. Fans who have Roku, Amazon Fire or Apple TV devices can also watch the Wildcat broadcasts by downloading the “Pearl River CC” channel from their app. stores.

The Bears knew that they were going into a fight against a tough East Mississippi team, Thursday at home. And... read more