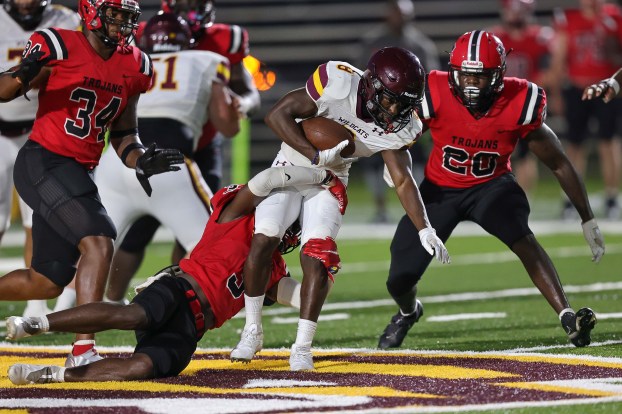 The Wildcats (0-1 overall) struck first at the 8:18 mark of the first quarter as former Gatorade Player of the Year Tony Brown (Hurley; East Central) caught a pitch and took it around the right side for a 7-yard score. PRCC held a 6-0 lead after a missed PAT.

The visiting Trojans (1-0) took advantage of penalties and Wildcat miscues to score 17 unanswered and take a 17-6 advantage into halftime.

The second half was dominated by the two defenses. Pinned on their own 1-yard line early in the fourth quarter, the Wildcats found some momentum offensively. Bryce Wallace (Pulaski, Tenn.; Giles County) scrambled for a big 11-yard gain to pick up a first down and then dumped a short pass to the left side for Chris Holifield Jr. (Mobile, Ala.; Leflore). The second-year running back dashed down the home sideline and across midfield for what looked to be a big gain but was stripped of the ball.

The Trojans capitalized on the turnover, marching down the field and scoring with 5:06 remaining to extend their lead to 24-6. Following another PRCC turnover, the Trojans tacked on an insurance score.

Tavion Smith (Hattiesburg; Oak Grove) was Wallace’s go-to target, setting career-highs with seven receptions and 106 yards. Smith’s longest reception was a 52-yarder where the 6-foot-4 receiver took the pass down the home sideline, fought off a couple defenders and cut back across the field for more yardage before eventually being hauled down.

Unfortunately for the Wildcats, five turnovers and 15 penalties for 114 total yards proved to be too much to overcome Thursday.

TICKETS
Fans are strongly encouraged to purchase tickets in advance to avoid lines. Tickets for Pearl River home games are available at PRCCAthletics.com/tickets.

TUNE IN
The Wildcats will once again livestream all games for free at PRCCMedia.com/gold. Fans who have Roku, Amazon Fire or Apple TV devices can also watch the Wildcat broadcasts by downloading the “Pearl River CC” channel from their app. stores.