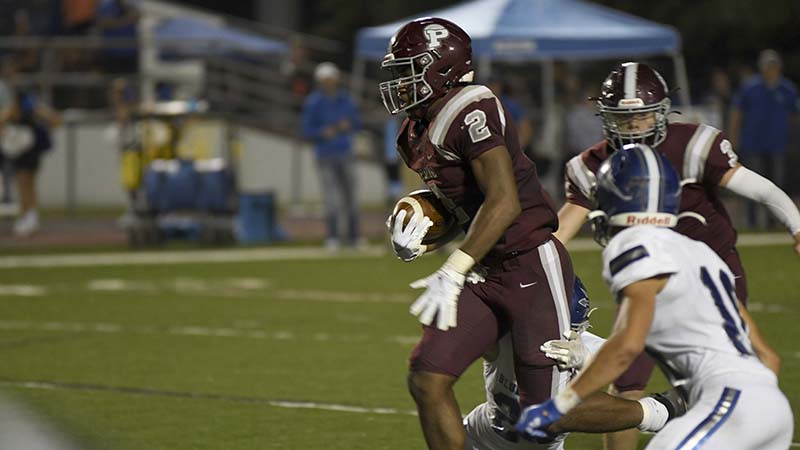 Dorian Robinson fights off a Blue Devils defender as he runs for extra yards during Friday’s game. Photo by David Thornton.

The Blue Devils on their first possession of the game turned the ball over on a fumble. Picayune Maroon Tide was there to recover it giving them the possession with great field position.

Picayune then scores in 10 plays through 38 yards capped off by a Dorian Roberson run for five yards.

The Blue Devils maintained control of the ball for the remainder of the first quarter, running 14 plays for 51 yards, but failed to convert on fourth and seven. The turnover on downs gave Picayune the ball.

Maroon Tide later extended its lead by 14 in the second quarter after a big 50-yard run from Darnell Smith.

Coming out of the break, Picayune wasted no time finding the end zone. In four plays, the Maroon Tide took it to a 21-0 lead after a 37-yard touchdown run by Donta Dowdell.

On the subsequent kick off, the Blue Devils fumbled the ball and the Maroon Tide recovered it on the 27-yard line.

The Maroon Tide scored again after a five play 27-yard drive, capped off by a quarterback goal line run from Dawson Underwood. The Maroon Tide led 28-0 with 7:25 left in the third quarter.

The Blue Devils tried their best to gain some rhythm on offense but come up empty on fourth downs.

The Blue Devils got two plays following the Picayune touchdown after a fumble allowed Picayune to regain control.

The Maroon Tide scored in one play through a 23-yard touchdown pass from Brady Robertson to Darnell Smith with 7:50 left in the fourth.

The Maroon Tide walked off with a dominant win against the Blue Devils in a 42-0 shut out win. After the game Head Coach Cody Stogner said,

“We played well and we actually held onto the ball tonight, we took advantage of some turnovers, we kind of came out flat in the first half, so we challenged them at halftime and they responded well.”