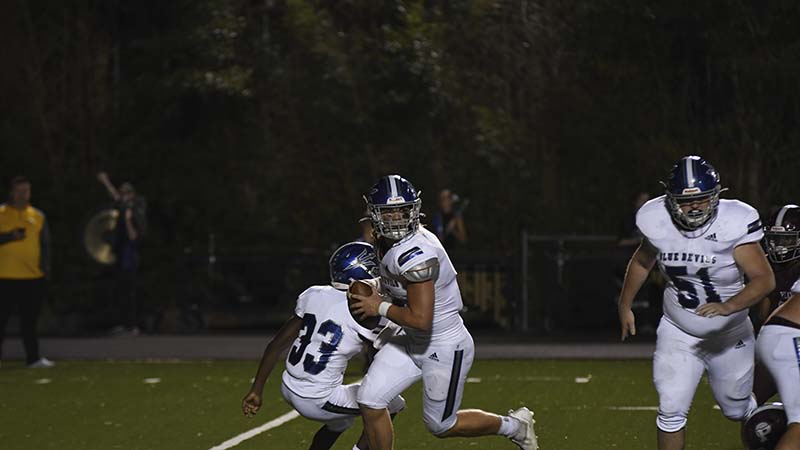 Poplarville quarterback Dalton Lee rolls out of the pocket to find a target during recent action. Photo by David Thornton Jr.

Last week the Hornets went on the road to face the Pass Christian Pirates. The Hornets won 26-6, extending their streak to four wins in a row.
During Friday’s game, Maurice Travis had two touchdowns on 17 carries for 173 yards for the Hornets. Tyron Holston has one rushing touchdown on seven carries for 92-yards. On the defensive side of ball, Mark Will had six solo tackles and two assisted tackles; Khalid Moore had two sacks, a forced fumble along with seven total tackles.
“It was a good win over undefeated Pass Christian,”
Head Coach Jay Beech said.

The Hornets (4-1) now begin district play this week and will host the Purvis Tornados (1-3) on Oct. 1. There is a long-standing rivalry between these two teams stretching back to over 60 games.
“In rivalry games you can throw records out of the window, it’s going to be a tough football game and both teams will get after it and play real hard,” said Beech.

Winning the turnover battle will be important for the Hornets on Friday. Playing smart with the ball, executing plays and causing turnovers will determine the game.
“If we do that we have a very good shot at winning,” said Beech.

Friday’s game will be the rescheduled Homecoming event, which was moved from Aug. 17 to Oct. 1 due to inclement weather.
Homecoming festivities start at 6:30 with the Hornets kicking off against Purvis at 7 p.m.