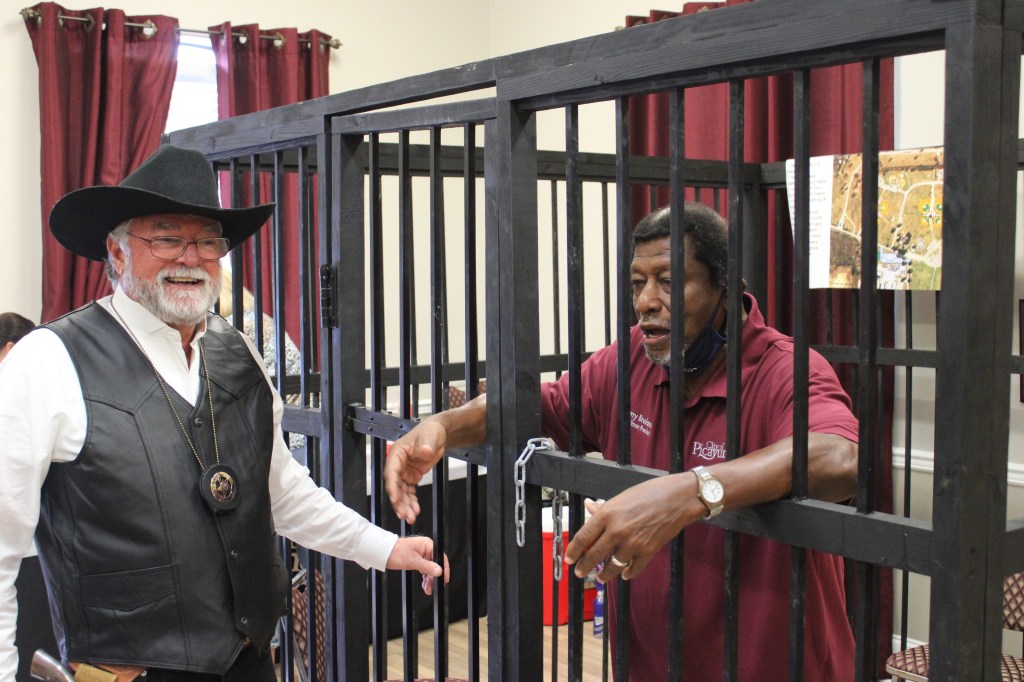 The city of Picayune was awarded a $1.9 million BP grant to be used to renovate Friendship Park, but that grant requires the city to put up a 20 percent match, or $380,000.
To cover that match, several fund raisers have been held in the city, the most recent of which was a Jail and Bail.
to renovate the Friendship Park Playground. In addition to raising money through raffles at the Street Festival, Kiwanis of Picayune donated a merry go round to the park that will be wheelchair accessible.
This week’s culmination of the Jail and Bail was the conclusion of a community fundraiser designed to involve residents by establishing warrants for “Notorious Criminals and Sneaky Suspects” who are “arrested” and taken to a temporary jail set up at the Intermodal Tourist Center on Highway 11. The wanted individuals were given a bail, which could be paid by Picayune’s residents or the person wanted in the Jail and Bail.
On Wednesday, City Council member Larry Breland participated in Jail and Bail. His bail was set at $250. He paid his bail and then posed for a picture holding his wanted poster.
The Jail and Bail began the first week of August and ended on this week. Estimates show that more than 110 people participated in the fundraiser. Capt. Theresa Milar with the Picayune Police Department said on Wednesday that the effort raised more than the goal of $10,000.
On Thursday, city of Picayune Grant Administrator Christy Goss said an exact total is currently unavailable because additional donations are expected.
Even though the Jail and Bail event is over, residents can still donate to the cause through Picayune Main Street. Donations can be submitted by check, or paid through Venmo or PayPal.
The money raised through the community fundraiser will be used with the grant to rebuild the playground and add handicap accessible features to Friendships Park. Other upgrades will include tennis courts, better drainage and turf on the ball fields, repairs to the tee ball field, renovation of and additional concession stands, a new parking lot, new bathrooms and security camera systems.
The park is expected to be fully renovated by July 2022.
Cutline: Left David Allison releases City Council member Larry Breland after paying his $250 “bail.”