Hornets add to successful season with win over Bulldogs, 35-16 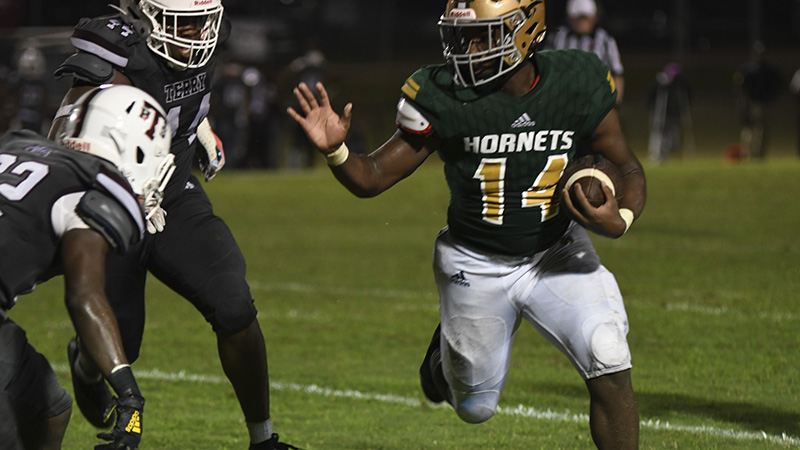 Poplarville Hornets running back Avan Jarvis started the first play of Friday’s big win with a run for 55-yards. The very next play he ran for 9 yards, picking up a first down and put his team within scoring position. On first and goal, Quan Huderson wasted no time to  rush into the end zone for a touchdown.

The Terry Bulldogs did their best to match the score with their own big 50-yard rush from Hayden Gamblin. But the Bulldogs could only cap off their eight-play drive with a field goal by Donovan Allen.

After a couple unsuccessful drives from both teams, the Hornets found the end zone again at the 9:49 mark in the 2nd quarter. In 6 plays Quarterback Matt Will ran on first and goal, putting the hornets up 14-3 with Zack Carpenter’s PAT.

The Hornets got the ball back with less than eight minutes left until halftime and worked hard to get within 10 yards of pay dirt after 17 plays, but a fumble recovered by Terry prevented the Hornets from adding to their lead.

Terry had the ball with 1:21 left but got nothing out of their drive after Hornets caused a quick three and out with :42 left. Terry then miss handled the punt snap and recovered on their own five-yard line giving the Hornets great position to score. In two plays, the Hornets did just that when Will crossed the end zone a second time via a four-yard scramble.

Then Hornets went into halftime up 21-3 with Carpenter’s extra point.

With two minutes left in the third quarter, the Hornets scored again when Maurice Travis ran four yards for the touchdown, making it a 28-3 Hornet lead with the PAT.

Following the Hornets touchdown the Bulldogs fired back, with a pass from Dylan Gray to Davian Liddell for a one-play 46-yard drive. The Bulldogs’ PAT attempt was blocked by the Poplarville’s Lawrence Jamison. With 1:40 left in the third quarter, the Bulldogs cut the Hornets’ lead 28-9.

Poplarville’s next possession was a quick three and out and Terry made the best of their opportunity. In eight plays the Bulldogs reached the end zone from nine-yards out with a pass to Quad Huderson. With 8:57 left in the fourth quarter the score was 28-16.

The Bulldogs’ failed onside kick resulted in another score for the Hornets through nine plays covering 46 yards. Avan Jarvis ran it in from six yards out, giving the Hornets the 35-16 edge with less than five minutes left in the game.

Jarvis finished with 27 carries for 237 yards.

Head Coach Jay Beech said “I’m really happy about the win but still I’m a little uneasy about some of the things that happened in the game we know we cant keep making these mistakes if we want be a great team.”