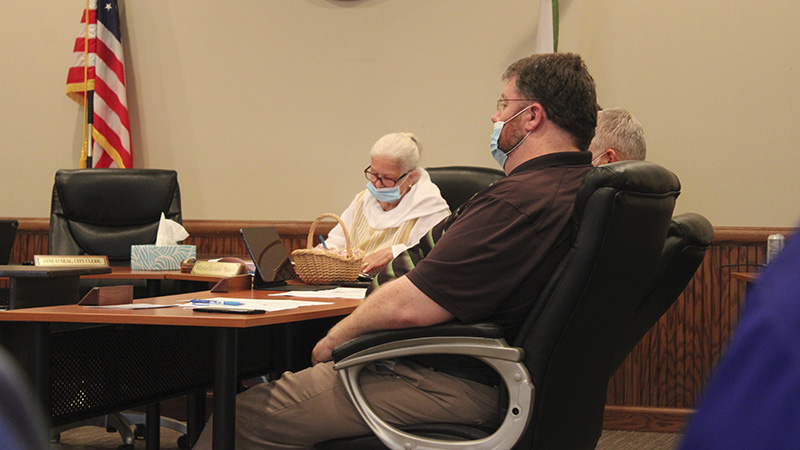 Members of the Board of Aldermen listen to city engineer Jason Lamb discuss the need for street repair projects in the city of Poplarville. Photo by David Thornton Jr.

The Board of Alderman met Tuesday to discuss projects that needed to be considered for public works, updates in the fire and police departments and approved events for the upcoming Halloween holiday.

During that meeting, the Board closed the final transaction for the purchase of the old Mississippi Power Company building and its adjacent land. Mayor Louise Smith, City Clerk Jane O’Neal and city attorney Gregory Holcomb were authorized to execute the final closing document for the building, located at 201 W. Cumberland St. The city of Poplarville will pay $125,000 to the Mississippi Power Company before Sept. 30 for this building, which is planned to become the new location of the Poplarville Police Department.

City Engineer Jason Lamb discussed street maintenance projects to consider in the near future as the projects relate to planning and funds. He provided a list of roads and streets that need repair and the work required to fix them. He said that North Main Street has sewer trench failure, North Jackson Street needs a culvert replaced and West North Street has a failed box culvert under the sidewalk. He added that there is a need for a citywide asphalt paving and maintenance project. Three water system improvements are needed at a location on Highway 26 west, at the intersection of Buck Kirkland and Highway 53 and along Old Wiggins Highway. No action was taken on the matter, but the need for those repairs will be discussed more in the future.

The Board acknowledged the retirement and resignation of Oscar Bolton from the position of operator in the Public Works Department.

Now that the spot is open, the Board approved a motion  to accept in-house candidate applications for the position. If no qualified candidate is identified internally, the announcement will be advertised externally.

The Board also approved a post travel motion for Officer Shawn Vincent with the Poplarville Police Department to participate  in a “Full refresher Course 201-3” at a cost of $1,500. The training was conducted at the Harrison County Law Enforcement Training Academy.

The Board also set a 9 p.m. curfew for door to door trick or treating on Oct. 29.