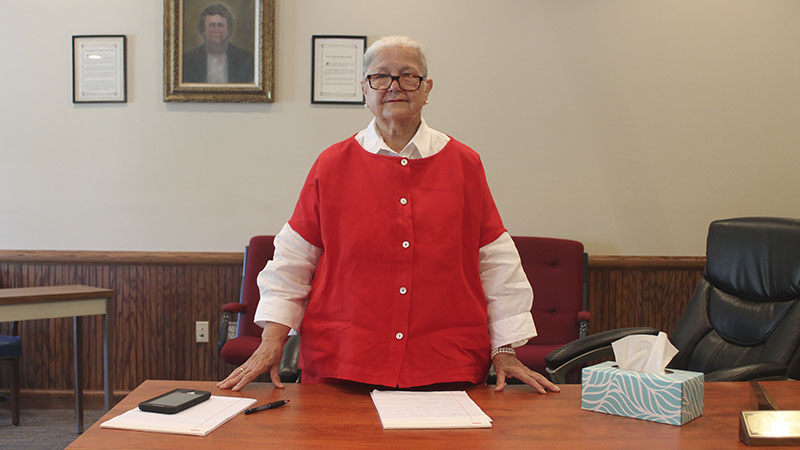 Louise Smith is Poplarville's first female mayor. She has many plans to help the city move forward, one of which is becoming part of the Main Street program. Photo by David Thornton.

The first four weeks of Mayor Louise Smith in office has been, “exciting and busy.” Before being elected into office, Smith was a resident of Poplarville for 44 years, a retired educator for 30 years, teacher and a principal. She also worked as a grant writer and caregiver to her husband who had Alzheimer’s. When the opportunity to become the new mayor of Poplarville presented itself, Smith was excited and committed to winning the election because she believes she can help the city grow. Her election means Smith is Poplarville’s first female mayor.

“There are a lot of differences in running a school compared to a city,” Smith said.

During her time in office she met a lot of people from across the community along with other mayors while attending Mississippi Municipal League conferences. Smith has also been in touch with the Poplarville community recently. She talked with representatives of the local NAACP last Friday, discussing events they want to host for the community.

“I meet with people on a regular basis. I’m coming in on my fourth week and a lot is coming at me fast and I got a lot of information and working on my plans, but meeting people is mainly what I’m trying to do,” said Smith.

Smith might even make a request for volunteers in an effort to bring in some young people to help her with research and help with other things that need to be done.

She looks forward to working and building relationships with everyone she meets.

Downtown Poplarville has a lot of empty buildings and streets that need repairs.

“A lot of the facades need work and I want to improve that,” said Smith.

She plans to apply for grants and utilize Main Street programs to help improve the downtown area. Smith said she will have her plans in place so that when grant money comes in, the city will be able to use it for improving many things such as repairing streets and improving the water system, which has been an issue recently.

“Picayune is a member of Main Street and they’ve done a wonderful job in their downtown area,” said Smith.

Smith has no specific plan to boost job creation at the moment, but opportunities for new jobs will come. Forest General Health is planning to build a new hospital and there are plans to build an industrial park off Highway 26 close to the current location of the Love’s Travel Center. Both are expected to be funded by the Gulf Coast Restoration grant funds.

“I will always be in there as the top supporter, education is always number one,” said Smith.

She’s excited about the programs Pear River Community College has to offer, including its work force development.

“ If you love what you’re doing and you’re committed, everything falls in place,” said Smith.

Smith was very proud of herself when she was named Citizen of the Year for Poplarville. She didn’t look for that honor, but she was always a hard worker and continued to look for ways to improve Poplarville and its community.