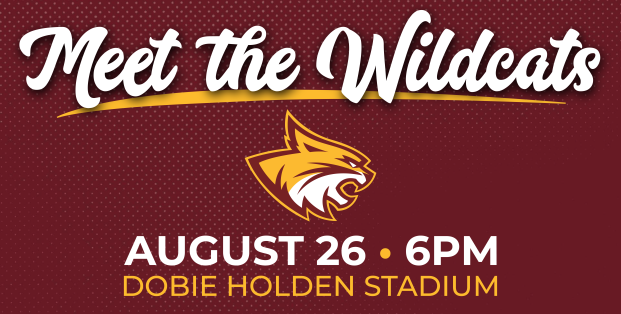 POPLARVILLE, Miss. — Pearl River fans can get an early look at the 2021 Wildcats as part of the Meet The Wildcats event on Aug. 26 at 6 p.m. in Dobie Holden Stadium.
Admission is free and concessions will be available.
The night will begin with introductions of Pearl River’s men’s and women’s soccerprograms along with the volleyball and rodeo teams.
The Wildcat cheerleaders, Spirit of the River Marching Band and String of Pearls will follow with performances and introductions.
The night will be capped off by an introduction of the Pearl River football team and a controlled scrimmage.
FOOTBALL
The Wildcats are led by second-year head coach Seth Smith. Under Smith’s guidance in 2020, the Wildcats improved statistically across the board. One area of growth was in yards-per-game, where PRCC improved more than 100 yards per contest.
Pearl River opens its season at Dobie Holden Stadium on Sept. 2 against Mississippi Delta.
RODEO
Frank Graves is at the helm of the Wildcat rodeo team. The Wildcats have an exciting slate of rodeos during the fall semester, traveling to Missouri College on Sept. 23, West Alabama on Sept. 30, Three Rivers College on Oct. 14, Southern Arkansas on Nov. 4 and Murray State on Nov. 18.
SOCCER
PRCC’s men’s program is led by Drew Gallant and is fresh off a 12-4 season that culminated in the Region 23 Championship Game. The women’s soccer team is coached by Henrik Madsen who helped the Wildcats hold opponents to under one goal per match during the 2020-21 season.
The soccer programs open their season on Aug. 25 at Hinds. Women’s soccer hosts Motlow State on Aug. 29 and the men’s program plays its first home game on Sept. 7 against East Central.
VOLLEYBALL
Pearl River’s volleyball program is entering its third season in existence and is led by coach Haley Chatham. PRCC is fresh off a 16-10 season and a deep run into the ACCC tournament.
The Wildcats open their season Friday at MACCC rival Northwest.
The first home event will take place on Aug. 30 against Louisiana College.
TICKETING
Season and single-game tickets for football are available at PRCCAthletics.com/tickets. Single-game tickets for soccer and volleyball go on sale soon. Fans are strongly encouraged to purchase their tickets in advance.
FOOTBALL BROADCASTS
The Wildcats will once again livestream all games for free at PRCCMedia.com/gold. Fans who have Roku, Amazon Fire or Apple TV devices can also watch the Wildcat broadcasts by downloading the “Pearl River CC” channel from their app. stores.
Games will also be available over the air in Pearl River County by tuning into 1320 AM and 106.9 FM.; in Columbia on WCJU 102.7 FM and 1450 AM; and in Hattiesburg on WHSY 105.9 FM and 950 AM. The radio broadcast is also available at WRJWRadio.com or by downloading the WRJW app.
For the latest on Pearl River Community College athletics, follow us on Twitter (@PRCCAthletics) and Facebook (PRCCAthletics).

Buddy Ball provides athletic activities to the special needs community in Picayune. At this moment the program only offers baseball.... read more