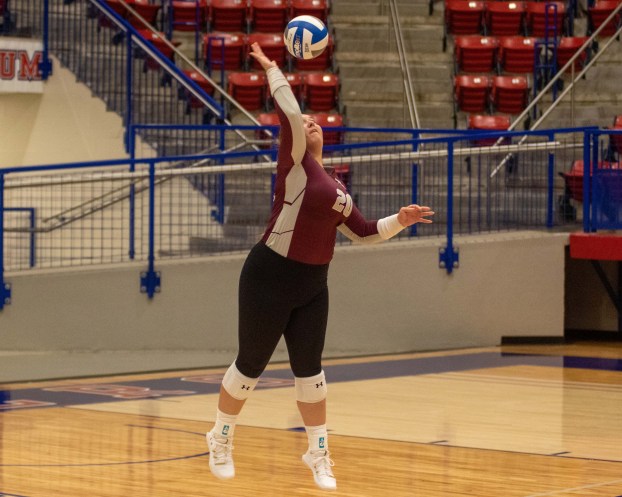 PEARL RIVER 3, PENSACOLA CHRISTIAN 0
Pearl River (3-0 overall) and Pensacola Christian (0-2) were neck and neck through the beginning of the first set before the Wildcats began to pull away. Losing 6-5, PRCC flipped the momentum with a 10-1 run to take a 15-7 lead. The run was capped off by back-to-back kills from Avery Beth Durdin (Olive Branch; Lewisburg) and Diamond Jones (Gonzalez, La.; East Ascension).

The Eagles were able to climb back into the match, but the Wildcats quickly slammed the door to take the first set 25-14.

PCC took the first three points of the second set for its largest lead of the day before PRCC claimed six straight points highlighted by consecutive aces by Amy Wright (Palm Bay, Fla.; Melbourne Central Catholic) and a Payton McKerchie(Vancleave) kill. The points made the score 8-4.

The teams continued their back-and-forth affair to a score of 16-15 with the Wildcats on top.

Just a few points later, the Eagles and Wildcats were knotted up at 22 points each.

Any chance that Pensacola Christian had to take the set was put to rest after an Eagle service error and a kill off the hand of Jones as the Wildcats claimed the second set 26-24.

The beginning of set three felt like neither Pearl River nor Pensacola Christian could pull away as the teams battled to an early 5-5 tie.

An Eagle service error started a 7-1 rally for the Wildcats who took a 12-6 lead.

Six straight points were rattled off by the Wildcats making the score 24-11. The Eagles took back-to-back points, but a kill by Julianah Overstreet (Vancleave) put an end to the set and the match with a score of 25-13.

PEARL RIVER 3, COASTAL ALABAMA – EAST 0
The first set of the second match of the doubleheader clash between Pearl River and Coastal Alabama – East (0-2) as the teams battled well past the 25-point mark.

The Wildcats finally claimed the first set by a score of 30-28.

PRCC was able to finish the second set in a much quicker fashion, winning 25-19.

Pearl River once again had to battle to win the third set as they claimed it 25-23 to win the match.

UP NEXT
The Wildcats will compete in the Bishop State Wildcat Classic on Friday and Saturday. Pearl River takes on Snead State and Northwest beginning at 4 p.m. on Friday. On Saturday, PRCC will compete against Bishop State at 10 a.m.

RAYMOND, Miss. — The Pearl River women’s soccer team fell in its first game of the year on Wednesday, losing 2-1 at... read more