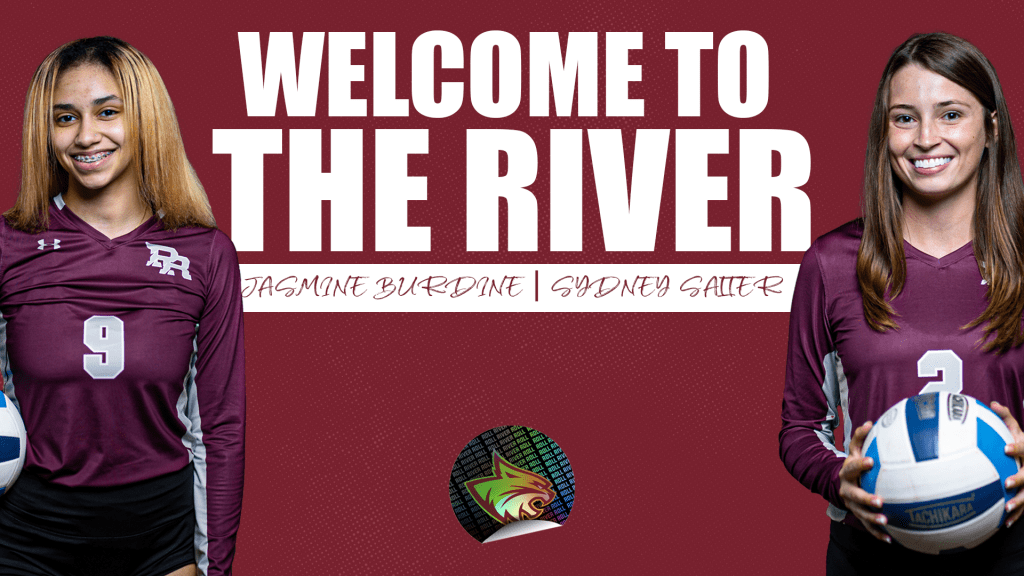 POPLARVILLE, Miss. — Pearl River volleyball has put its finishing touches on the 2021 roster, adding South Alabama transfer Sydney Salter and Biloxi outside hitter Jasmine Burdine. In addition to playing volleyball, Salter will suit up for the PRCC women’s soccer team.

Head coach Haley Chatham believes her familiarity with both players made the decision to bring them to Pearl River easy.

“I spent five out of six years of school volleyball as Sydney’s coach and I was able to coach Jasmine during club season,” Chatham said. “We only get two very quick seasons with our players in the JUCO world. It’s not always a quick thing when it comes to establishing your standards and earning trust from your players.

“When these two popped up on the radar, they were both no-brainers. I’ve enjoyed long-term relationships with both of them and I am just so happy to be able to coach them again.”

SYDNEY SALTER
The 5-foot-5 Salter comes to Pearl River after spending a season as a member of the South Alabama soccer team.

Before becoming a Jaguar, Salter was a decorated volleyball and soccer player at Vancleave High School

Salter was the 2019 recipient of the Wendy’s Heisman High School Scholarship, which is awarded to student-athletes who have succeeded on the field and in the classroom.

In her four years on the volleyball team, she helped lead Vancleave to three MHSAA state championships and an astonishing 136-19 record.

“Transferring out of South Alabama, I wanted to go somewhere that I knew that I would be loved and taken care of,” Salter said. “I really missed volleyball and I was only playing soccer there.

“It just felt like home here and I think that it was the best fit for me.”

Chatham feels that Salter will be a valuable asset to her team as a defensive specialist/libero.

“We are so excited to add Sydney to the lineup this season,” Chatham said. “Her style of play is going to take us up a notch defensively. She’s unbelievable fast, crazy-smart and passes with a consistency that tops the charts. She never cuts corners, she refuses to go down without a fight and she takes pride in working hard. I can’t wait to see her on the court in maroon and gold.”

“We hope that Sydney can bring a lot of goals to our team,” he said. “She’s very athletic and she works very hard. I think that she adds versatility to our program.

“She brings loads of experience with her.”

JASMINE BURDINE
Burdine had a breakout senior season for the BHS Indians, leading her team in kills (103) and kills per set (2.5). Her 98 assists and 19 blocks were each second on the team.

“I know a lot of the girls that are here and we’ve been playing together since we were 13,” Burdine said. “Coach Chatham was our coach when we were playing travel ball and since then we’ve all stuck together.

“Everything feels familiar and I’m very comfortable. It feels like a family.”

Burdine’s versatility was an important factor in Chatham’s recruitment.

“Jasmine Burdine is an excellent get for PRCC Volleyball,” Chatham said. “She is a well-rounded player who can do it all. A product of Biloxi High School, she comes to us highly trained in multiple positions and ready to compete. She’s a great kid and is willing to play wherever she can be the most helpful to the team, which is a major reason that I’m so thrilled Jasmine chose to be a Wildcat.”

SCHEDULE
The Wildcats are just over a week away from kickstarting the 2021-22 season on the road against MACCC rival Northwest on August 20. Pearl River will host its first home match on August 30 when Louisiana College comes to Shivers Gymnasium.

TICKETS
Single-match tickets will be made available soon and can be purchased at PRCCAthletics.com/tickets.

HOW TO WATCH
The Wildcats will once again livestream all matches for free at PRCCMedia.com/gold. Fans who have Roku, Amazon Fire or Apple TV devices can also watch the Wildcat broadcasts by downloading the “Pearl River CC” channel from their app stores.