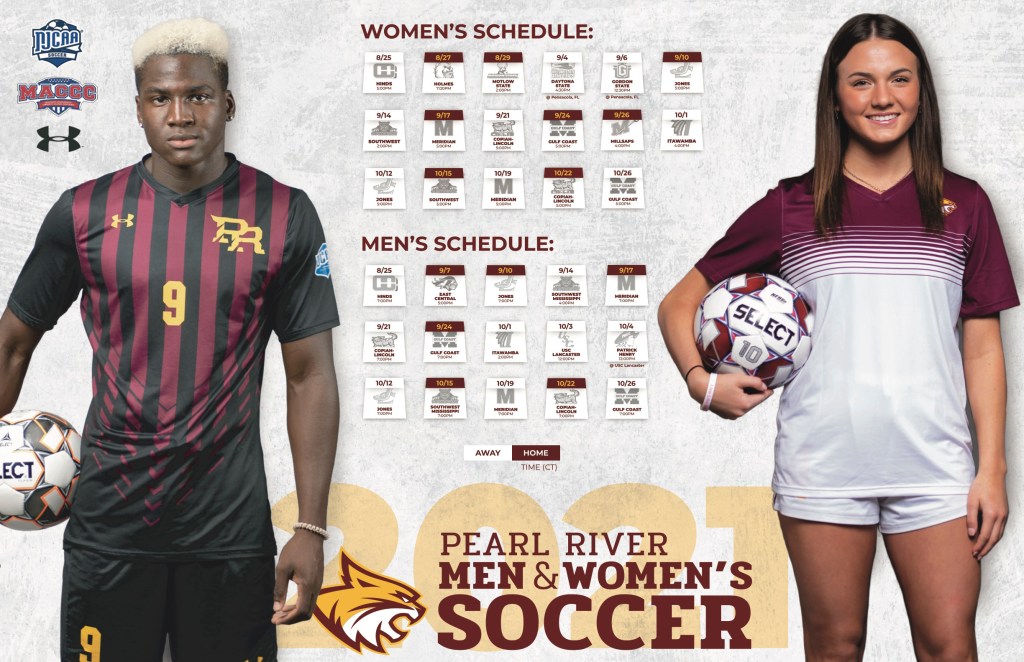 POPLARVILLE, Miss. — The Pearl River men’s and women’s soccer programs have recently finalized their 2021 schedules with the men playing 15 games and the women competing in 17.

The Wildcats open the season on the road against Hinds on Aug. 25 before returning to PRCC Soccer Complex to host East Central on Sept. 7 and rival Jones College on Sept. 10.

Pearl River travels to Summit. to take on Southwest on Sept. 14 before returning home on Sept. 17 to host Meridian.

After a quick road trip to Copiah-Lincoln on Sept. 21, PRCC’s archrival Gulf Coast comes to town on Sept 24.

The Wildcats hit the road for four games to open the month of October taking on Itawamba on Oct. 1, USC-Lancaster on Oct 3, Patrick Henry on Oct. 4 and Jones College on Oct. 12.

Southwest comes to town on Oct. 15 before PRCC travels to Meridian on Oct. 19.

The Wildcats play their last home game of the season on Oct. 22 against Copiah-Lincoln before wrapping up the season at Gulf Coast on Oct. 26.

The women’s soccer program also opens the season on the road against Hinds on Aug. 25.

Pearl River plays its first two home games of the season against Holmes on Aug. 27 and Motlow State on Aug. 29.

The Wildcats travel to Pensacola, Fla. to take on Daytona State and Gordon State on Sept. 4 and Sept. 6, respectively.

Jones College travels to Poplarville to take on the Wildcats on Sept. 10, shortly after Pearl River takes on Southwest in Summit on Sept. 14.

PRCC hosts Meridian on Sept. 17 and travels to Copiah-Lincoln on Sept. 21.

The Wildcats return to the PRCC Soccer Complex for a two game homestand against Gulf Coast on Sept. 24 and Division III Millsaps College on Sept. 26.

Pearl River has back-to-back road contests to open October, taking on Itawamba on Oct. 1 and Jones College on Oct. 12.

Diallo finished the 2020-21 season with seven goals and two assists which was second on the team and Nicholson finished with nine goals which was tied for second in the MACCC. He also chipped in four assists.

The Wildcats recently receive a No. 13 ranking in the United Soccer Coaches preseason poll.

The women’s soccer program finished with a 6-4-4 record, scoring almost two goals a game. The Wildcats had a lockdown defense that allowed less than one goal per game and returns defender Bailey Smith (Gulfport) who was an integral part of their success.

HOW TO WATCH
The Wildcats will once again livestream all home games for free at PRCCMedia.com/gold. Fans who have