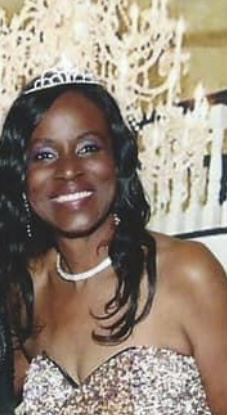 “My Soul Has Been Anchored In The Lord”

Funeral services will be held Wednesday, August 11, 2021, at 1:00 p.m. in Rose of Sharon Church of God in Christ, 500 North Beech Street, Picayune, MS 39466. Visitation will be one hour prior to service time.  Rev. Reginald Reid will officiate at the services.

Juanita Washington Stuckey was born April 10, 1964, in Picayune MS to Lucy Washington Preston and Carl (Ellis) Washington Sr. Juanita accepted Christ at an early age under the leadership of the late Rev. Dr. Alonzo Dees. Later in life, she continued her walk with God to Bethlehem Baptist Church under the leadership of Rev Louis Thomas and was very active, served on numerous committees, and assisted with other churches activities in the community.

Juanita was a graduate of Picayune Memorial High School, Class of 1982. She continued her education to the University of Southern Mississippi receiving her MBA in computer science. Juanita went on to marry Thomas Stuckey in 1999, and to this union enhanced her life with three beautiful children: Thomas Stuckey Jr., Shervette Jones, Terrence Stuckey and grandchildren. Juanita’s lifetime careers include John C Stennis Space Center, Fuelman, Federal Emergency Management Agency (FEMA). Juanita was also a tax specialist. Juanita formed her own LLC “Neat Creations” where she professionally created personal and organizational memoirs for various occasions. Juanita’s work within “Neat Creations” was so innovative that it touched households in many states.

On July 31,2021 Juanita began her transition from her earthly home to her heavenly resting place. Juanita will be missed by a host of friends and family. Her house was always flooded  with friends looking for advice, love, and a home cooked meal. The door was always open, and her words were always so kind.