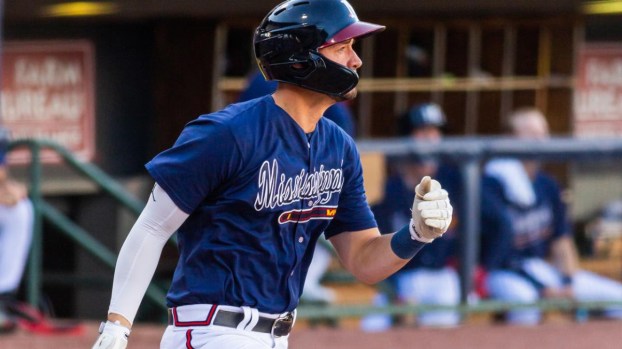 PEARL, MS – The first place Mississippi Braves used a Drew Lugbauer grand slam and 13 hits to roll past the Montgomery Biscuits, 9-3, in Tuesday’s series opener. Alan Rangel (W, 2-1) logged another quality start and won with 6.0 innings of three-run baseball. The win pushes the Braves’ lead in the Double-A South standings to 3.5 games over the Biscuits.
Mississippi (54-37) struck first in the second inning. Shea Langeliers started the frame with a single against former fourth overall pick Brendan McKay, upping his on-base streak to 16 games. Later in the inning, Jalen Miller swatted a double down the left-field line scoring Langeliers to make it 1-0.
The Biscuits (50-40) scored single runs in each of the next three innings to take a 3-1 lead. In his third Montgomery outing, McKay gave up one run on three hits with three strikeouts and two walks.
Trailing 3-1 in the top of the fifth inning, the M-Braves rallied against Biscuits’ reliever Jordan Brink (L, 2-1). Justin Dean, Trey Harris, and Braden Shewmake singled with one out. Dean scampered home to pull within one on a Brink wild pitch. Langeliers was walked to load the bases once again. Lugbauer hit a 447-foot grand slam to right-center two batters later, giving the M-Braves back the lead at 6-3. The grand slam was his 15th home run and third by a Braves’ batter in 2021. The exit velocity was 113 mph.
The M-Braves followed that five-run fifth inning with a two-run sixth. The rally came with two outs when Dean singled, then scored on a Harris double. Then, Shewmake singled off the foot of reliever Justin Sterner, scoring Harris, and it was 8-3.
Odalvi Javier relieved Rangel after his 6.0 innings and 87 pitches. In the 23-year-old’s last two starts, he has 16 strikeouts to just one walk, over 12 innings, and three runs. Javier walked two and surrendered a hit but escaped with a zero on the scoreboard.
The Braves added their ninth run in the top of the eighth inning when Dean logged his third hit of the game, a triple to right-center, then scored on another wild pitch. Dean was 3-for-5 with three runs scored.
Indigo Diaz ran his scoreless streak to 12.0 innings with a six-pitch bottom of the eighth inning, striking out one. Diaz has 21 strikeouts over his first nine outings and only five walks.
Matt Withrow loaded the bases in the bottom of the ninth inning but kept the Biscuits from scoring to end the game.
Every Mississippi batter reached base safely, and Dean, Harris, Shewmake, Langeliers, and Jefrey Ramos logged multi-hit performances. The M-Braves have won 9-of-10 and are back to a season-high 17 games above .500.
The M-Braves and Biscuits will play game two of the series on Wednesday night at Riverwalk Stadium. RHP Spencer Strider (2-5, 5.72) starts for the Braves opposite RHP Jack Lobosky (0-3, 5.21) for Montgomery. The first pitch is 6:35 pm, with coverage on 103.9 WYAB, mississippibraves.com, and MiLB.tv.
The M-Braves will return to Trustmark Park for their penultimate homestand of the season, August 24-29, vs. Pensacola. The homestand features Bark in the Park, First Responders Day, Thirsty Thursday, a Drew Waters MVP Statue Giveaway, Fireworks, and Family Fun Day. For tickets or more information, fans should visit mississippibraves.com or call 888-BRAVES4.
You Might Like

The Pearl River Soccer Club is ready to kick off its 2021 fall season. This organization coaches boys and girls... read more