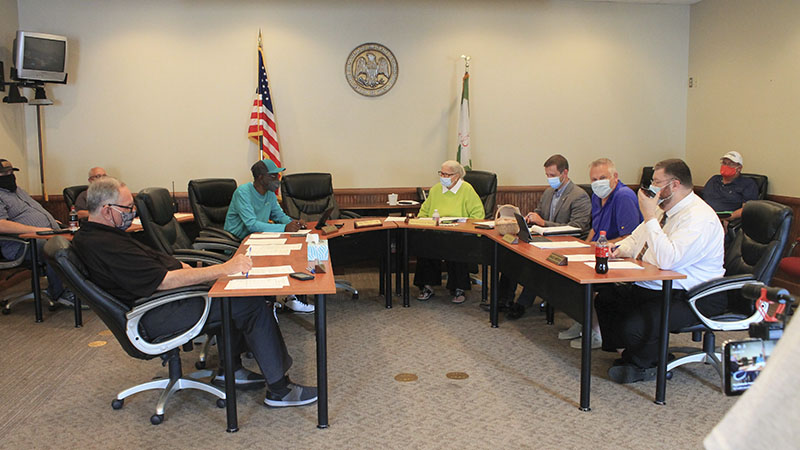 Poplarville's Board of Aldermen approved a motion to increase the pay to officers who work after-school events. Photo by David Thornton

Poplarville School District has typically entered into a contract with the Poplarville Police Department to have officers at games and other after school activities.

Poplarville Police Chief Daniel Collier said he is also having a hard time getting his people to come to work the games.

This has been an issue since COVID hit over a year ago, leading to the number of officers showing up to these events to dwindle.

The security contract between the Poplarville School District and the city requests the presence of six officers at every after-school event.

“But it’s just no way,” said Collier, which led to the contract not being signed.

Collier issued a call for officers who want to work the events to give them an opportunity to do so. If Collier is short a few officers, he can get the rest he needs from the school’s police department or Sheriff’s Department.

“If I’m supposed to have six officers there and I only have two and something bad happens, where’s the liability going to be?” said Collier.

School district officers have to work all sporting events, choir concerts, school dances and graduations. Poplarville School District Police Chief Damon Carr said he is required to work every basketball game.  Officers working school events were paid $25 an hour. That amount was increased to $30 during the Board meeting. The pay increase is an incentive to get more officers to work these events.

“Some of the guys work 12 hour shifts, they want to go home and see their families, they don’t really want to hang out at the school for another two to three hours. Some officers love them, I enjoy them but I have a family too, but we work it out and make it work,” said Collier.

“It’s a safety issue and it will work out, we just got to do it,” said Carr.